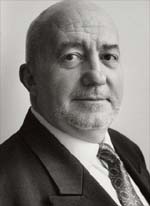 The baritone Alain Vernhes was born in Lyon, where he studied with distinction at the Conservatoire National, winning first prizes, as well as second Hortense Schneider Prize in the Concours National des Voix d’Or and the first Enrico Caruso Prize. His subsequent career has brought appearances in leading opera houses and concert venues in France and abroad, in the former with rôles ranging from Méphisto in Gounod’s Faust in Montpellier, to Arkel in Pelléas et Mélisande in Bonn and Paris.

In 1991 he achieved considerable success with four appearances as the Devil in Les Contes de Hoffmann, followed, in 1993, with Sancho Panza in Don Quichotte. Otherwise he has undertaken many of the leading rôles of baritone operatic repertoire, including Scarpia, Sharpless, Marcello, the Comte Des Grieux and, in Beethoven’s Fidelio, Pizarro. His recordings include Capulet in Roméo et Juliette for BMG and Arkel under Bernard Haitink.