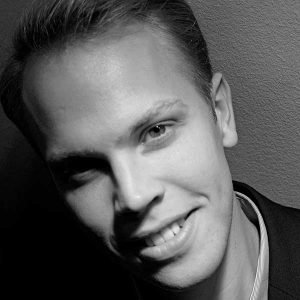 Albin Ahl made his debut as Old Convict in 2014 at the Royal Danish Opera  in Copenhagen. In Peter Konwitschny’s new production of Shostakovich’s Lady Macbeth of Mtsensk under the baton of Alexander Vendernikov. In 2016, he sang his first Mustafa in Rossini’s L’italiana in Algeri near Stockholm and, in 2017, Don Inigo Gomez in Ravel’s L’heure Espagnole will follow in Copenhagen.

In 2015, the young bass-baritone performed Bottom in Britten’s A Midsummer Night’s Dream at The Royal Danish Opera Academy, after having sung Demetrius in the same opera at Stockholm’s Operastudio 67 in 2011.

At Royal Danish Opera Academy, Albin Ahl performed parts including Leporello in Mozart’s Don Giovanni, Don Magnifico in Rossini’s La cenerentola and Nick Shadow in Stravinsky’s The Rake’s Progress in 2014, Don Inigo Gomez in Ravel’s L’Heure espagnole in 2015 and Junis in Britten’s The Rape of Lucretia and Méphistophélès in Gounod’s Faust in 2013.

Concert soloist Albin Ahl performed Bach’s Christmas Oratorio and Handel’s The Messiah at Hedvig’s Church Norrköping in Sweden. The bass performed under the baton of Christian Badea, Giordano Bellincampi, Olof Bohman and Alexander Vedernikov. In 2016, he has been holding a scholarship of Lied Academy of the International Music Festival Heidelberger Frühling.