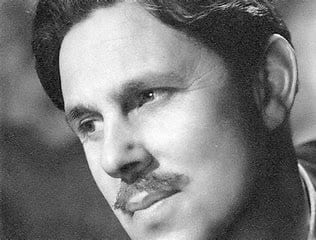 Alfred George Deller, CBE (31 May 1912 – 16 July 1979), was an English singer and one of the main figures in popularising the return of the countertenor voice in Renaissance and Baroque music during the 20th century. He is sometimes referred to as the “godfather of the countertenor”. His style in singing lute song, with extensive use of rubato and extemporised ornamentation, was seen as radical and controversial in his day but is now considered the norm.

Deller was an influential figure in the renaissance of early music: an early proponent of original instrument performance and one of the first to bring this form to the popular consciousness through his broadcasts on the BBC. He also founded the Stour Music Festival in 1962,  one of the first and most important early music festivals in the world.

Deller was born in Margate, a seaside resort in Kent. As a boy, he sang in his local church choir. When his voice broke, he continued singing in his high register, eventually settling as a countertenor.

From this choral tradition, Deller emerged as a soloist, largely as a result of the admiration of the composer Michael Tippett, who heard him while at Canterbury and recognised the unique beauty of his voice. Tippett introduced him to the public as a countertenor, rather than a male alto. He also became better known with a radio broadcast of Henry Purcell’s Come ye Sons of Art on the BBC’s Third Programme when this station was launched in 1946. He concentrated on popularising and recording the music of English Baroque and Renaissance music by composers such as John Dowland and Purcell.

Throughout the 19th century, it was only in the tradition of all-male cathedral choirs that the countertenor voice had survived.  Deller’s voice sounded remarkably high. Misconceptions about the countertenor voice were common at the time Deller was first gaining significant notice as a singer, which was only a matter of decades after the last castrati had died; Michael Chance tells the story that once, a French woman, upon hearing Deller sing, exclaimed “Monsieur, vous êtes eunuque”—to which Deller replied, “I think you mean ‘unique,’ madam.”

In 1948, Deller formed the Deller Consort  a group dedicated to historically informed performance. The group recorded music from as early as the 13th century and significantly expanded popular notions of the Baroque repertoire, producing high-quality authentic “period performances” of the works of Bach, Handel, Purcell, Dowland, and even folk songs.

Membership of the Deller Consort changed over the years. It included various baritones and tenors, as well as sopranos April Cantelo and Mary Thomas. From 1964, Alfred Deller’s son Mark was also a member.  In 1972, the Deller Consort performed for the Peabody Mason Concert series in Boston.  As well as directing the Consort, Deller also conducted some performances with chamber orchestras.

In 1960, Deller sang the role of Oberon in Benjamin Britten’s opera A Midsummer Night’s Dream.  Britten wrote this role with Deller specifically in mind, although he was dropped from staged revivals of the work against the composer’s wishes, probably because of poor acting technique.  He did record the opera, with the composer conducting.

Lutenist Desmond Dupré performed with him, initially as a guitarist; other accompanists included harpsichordist and musicologist Walter Bergmann. In later years, he worked with lutenist Robert Spencer and harpsichordists Harold Lester and William Christie. His recordings include the lute songs of Dowland, operas by Handel, Britten’s A Midsummer Night’s Dream, songs and semioperas by Purcell (such as The Fairy Queen), traditional English folk songs, works by Thomas Tallis, and the Bach alto repertoire. He recorded for HMV, Vanguard Classics, and Harmonia Mundi.

On 16 July 1979, Deller died whilst on holiday in Bologna, Italy after a heart attack. Deller and his wife are buried in the churchyard of All Saints’ Church, Boughton Aluph, Kent.

Deller was a Commander of the Order of the British Empire.

In Canterbury Cathedral, a tablet in the south quire aisle commemorates Deller and his work.

On 31 May 2012, All Saints’ Church, Boughton Aluph held a concert to celebrate Deller’s 100th birthday. There was also an exhibition of paintings and drawings by John Ward, who illustrated many of the early programmes for the music festival.  After the concert, the countertenor James Bowman planted a tree in memory of Deller in the churchyard where he is buried.