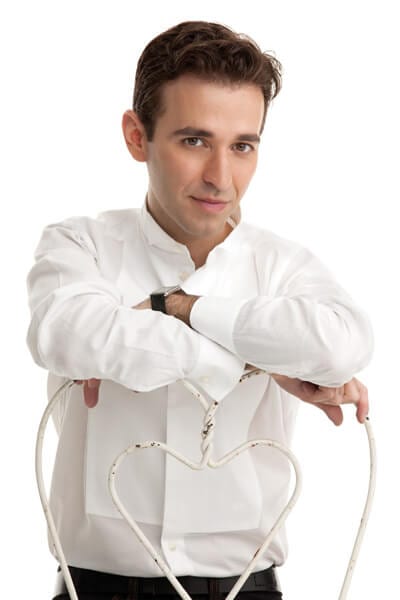 Countertenor Anthony Roth Costanzo began performing professionally at the age of 11 and has since appeared in opera, concert, recital, film, and on Broadway.

This season, Mr. Costanzo returns to the English National Opera for the title role in Philip Glass’ Akhnaten. And appears in two world premieres: Jake Heggie’s Great Scott at both the Lyric Opera of Chicago and the San Diego Opera. Jimmy Lopez’s Bel Canto at the Lyric Opera of Chicago. He also makes his debut at the Ojai Festival in the American premiere of Kaija Sariaaho’s Only the Sound Remains. Appears in concert with the International Contemporary Ensemble (ICE) at the Metropolitan Museum of Art. Curates performances in the inaugural season of the National Sawdust in Brooklyn, NY.

Recently, Mr. Costanzo has appeared at the Metropolitan Opera as both Ferdinand and Prospero in the world premiere of The Enchanted Island. As well as Prince Orlofsky in a new production of Die Fledermaus after making his debut as Unulfo in Rodelinda. He also recently  made his European debut at the Glyndebourne Festival in Rinaldo. He appeared in concerts with Jordi Savall in Barcelona, Paris, and Versailles. He has appeared in recent seasons with The Glimmerglass Festival, Canadian Opera Company, The Opera Company of Philadelphia. New York City Opera, Boston Lyric Opera, Michigan Opera Theater, Palm Beach Opera, The North Carolina Opera. And as a guest with Juilliard Opera.

In concert, Mr. Costanzo appeared as Prince Go-Go in the New York Philharmonic’s acclaimed production of Le Grand Macabre. Premiered a new work at Lincoln Center’s Mostly Mozart Festival with the ICE, performed Handel’s Messiah, Bernstein’s Chichester Psalms and Orff’s Carmina Burana with The Cleveland Orchestra, and Handels Messiah at Carnegie Hall. In addition he has been a featured soloist with the orchestras of Indianapolis, Alabama, Detroit, Denver, Seattle and with the National Symphony Orchestra.  He has also been presented in recital in Vancouver, Princeton, and at the Morgan Library in New York.

In 2012, Mr. Costanzo won first place in Placido Domingo’s international competition Operalia. He is also a 2009 Grand Finals Winner of the Metropolitan Opera National Council Auditions. He won a George London Award, received a career grant from the Richard Tucker Foundation, and became the first countertenor to win First Place in the Houston Grand Opera Eleanor McCullom competition, where he also won the audience choice prize. He received a Sullivan Foundation Award, and won First Place in the Opera Index Competition, the National Opera Association Vocal Competition, and the Jensen Foundation Competition.

The Tales of Genji

Mr. Costanzo is passionate about interdisciplinary collaboration, most recently appearing in sold out performances of a unique presentation of The Tales of Genji in Kyoto that incorporated traditional Kabuki, Noh actors, dancers and western music. He also created a pasticcio about castrati in collaboration with choreographer Karole Armitage and filmmaker James Ivory which was chronicled by the documentarian Gerardo Puglia. The subsequent film was selected for the Cannes Film Festival, qualified for an Academy Award, and aired on PBS affiliates. Mr. Costanzo played Francis in the Merchant Ivory film, A Soldier’s Daughter Never Cries, for which he was nominated for an Independent Spirit Award, and Simon in Brice Cauvin’s De particulier a particulier.

Working with composers, choreographers, directors and performance artists. He has appeared in New York venues such as Le Poisson Rouge, The Metropolitan Museum of Art. Joe’s Pub, The Park Avenue Armory, The Guggenheim Museum, and Merkin Concert Hall. In his youth, he performed on Broadway and in Broadway National Tours including A Christmas Carol, The Sound of Music, and Falsettos. He began his operatic endeavors playing Miles in The Turn of the Screw, and with an appearance alongside Luciano Pavarotti.