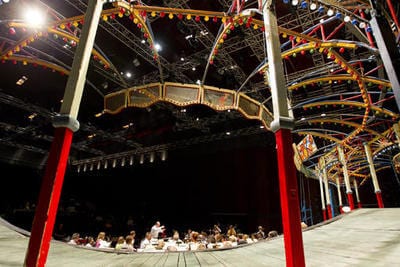 The Bartered Bride (Czech: Prodaná nevěsta, The Sold Bride) is a comic opera in three acts by the Czech composer Bedřich Smetana, to a libretto by Karel Sabina.  The work is generally regarded as a major contribution towards the development of Czech music. It was composed during the period 1863 to 1866, and first performed at the Provisional Theatre, Prague, on 30 May 1866 in a two-act format with spoken dialogue.

Set in a country village and with realistic characters, it tells the story of how, after a late surprise revelation, true love prevails over the combined efforts of ambitious parents and a scheming marriage broker. The opera was not immediately successful, and was revised and extended in the following four years. In its final version, premiered in 1870, it rapidly gained popularity and eventually became a worldwide success.

Somewhere in Bohemia. It’s the church consecration festival. The young people are boisterously celebrating their youth and their freedom. Låter, when they get married, everything will change. Nothing good awaits the men and women in marriage. They start to dance, with only Marie staying back with her friend Jenik. For her today is a terrible day. The marriage broker has announced that he will introduce her to her future husband – her father signed an agreement a long time ago with a rich farmer to whom he is indebted. Marie wants know how Jenik feels about her situation.

Jenik is a stranger with a secret. He tells her that he was chased away a long time ago by his stepmother and has been wandering the world, homeless, ever since. Marie’s fearful prompting persuades him to swear eternal love and devotion to her.

Kecal, the marriage broker, puts forth a very confident persona when dealing with Marie’s parents, Krusina and Ludmila. He boasts that he is always successful at whatever he tries his hand at, that he is unbeatable He claims that he can surely convince Marie that she will be happy, even if it is against her will because the husband he has chosen for her, Vasek, is irreproachable – even if he may not have any personality to speak of. Strangely, though, he does not actually introduce Vasek.

The act ends with the sounds of a polka from the exuberantly celebrating village youth.

A group of young men, Jenik among them, are drinking beer. They are extolling the merits of this universal remedy when Jenik disagrees and begins praising the intoxication of love. Kecal appears, looking for Jenik. He claims money is the most important thing.

Meanwhile, Marie takes the initiative and discovers that though her future husband comes from a wealthy family, he himself is an immature yokel who is completely controlled by his mother. Marie pretends to be another girl, who is in love with him and urgently warns him that Marie is deceitful. She even convinces him to renounce Marie.

Kecal loudly proclaims his perceived success. The festival-goers Marie’s father are shocked that Jenik would sell Marie for money.

A group of circus performers arrive at the festival. The ringmaster announces an incredible performance which will even include an American bear. The troupe gives a short performance demonstrating their attractions and Vasek is delighted by the stunning circus world. He admires Esmeralda, the tightrope walker, in particular. It turns out that the bear is not a real bear at all but a performer who happens to be completely inebriated. The ringmaster and Esmeralda convince Vasek to take over the part of the bear which is practically tailor-made for him.

Kecal arrives with Hata and Micha, Vasek’s parents. To their amazement, Vasek refuses to sign the marriage contract. He tells them about the beautiful girl who warned him about Marie. Marie enters the scene and is distraught, having found out about Jenik’s betrayal and Kecal shows her the terms of the agreement. When Vasek recognises her as the beautiful stranger who swore her love to him, Kecal proclaims his triumph. Mane sees herself caught in a snare of her own making and begs both sets of parents and Kecal for a last brief respite.

She is torn between her feelings of love, which now seem to be no more than a dream, and shock at Jenik’s betrayal, which she cannot believe. Jenik arrives and she confronts him. He cannot deny his actions and tries to explain but is unable amidst their heated argument. Marie decides to marry Vasek to punish Jenik.

Everyone congregates together to congratulate Marie on her decision. Even Jenik loudly congratulates her, at which Hata and Micha are awestruck. They recognise him as Micha’s missing son, Hata’s stepson. Jenik demands that the conditions of his agreement with Kecal be fulfilled, that Marie only be allowed to marry the son of Micha. Marie finally understands and embraces Jenik. Kecal has been beaten and is ridiculed.

Háta takes out her fury on Vasek, who appears in a bear costume. The villagers celebrate an impending wedding, which, for once, promises a happy marriage.

A crowd of villagers is celebrating at the church fair (“Let’s rejoice and be merry”). Among them are Mařenka and Jeník. Mařenka is unhappy because her parents want her to marry someone she has never met. They will try to force her into this, she says. Her desires are for Jeník even though, as she explains in her aria “If I should ever learn”, she knows nothing of his background. The couple then declare their feelings for each other in a passionate love duet (“Faithful love can’t be marred”).

As the pair leave separately, Mařenka’s parents, Ludmila and Krušina, enter with the marriage broker Kecal. After some discussion, Kecal announces that he has found a groom for Mařenka – Vašek, younger son of Tobiáš Mícha, a wealthy landowner; the older son, he explains, is a worthless good-for-nothing. Kecal extols the virtues of Vašek (“He’s a nice boy, well brought up”), as Mařenka re-enters. In the subsequent quartet she responds by saying that she already has a chosen lover. Send him packing, orders Kecal. The four argue, but little is resolved. Kecal decides he must convince Jeník to give up Mařenka, as the villagers return, singing and dancing a festive polka.

The men of the village join in a rousing drinking song (“To beer!”), while Jeník and Kecal argue the merits, respectively, of love and money over beer. The women enter, and the whole group joins in dancing a furiant. Away from the jollity the nervous Vašek muses over his forthcoming marriage in a stuttering song (“My-my-my mother said to me”). Mařenka appears, and guesses immediately who he is, but does not reveal her own identity. Pretending to be someone else, she paints a picture of “Mařenka” as a treacherous deceiver. Vašek is easily fooled, and when Mařenka, in her false guise, pretends to woo him (“I know of a maiden fair”), he falls for her charms and swears to give Mařenka up.

The celebrated Czech opera singer Emmy Destinn in the role of Mařenka, circa 1917

Meanwhile, Kecal is attempting to buy Jeník off, and after some verbal fencing makes a straight cash offer: a hundred florins if Jeník will renounce Mařenka. Not enough, is the reply. When Kecal increases the offer to 300 florins, Jeník pretends to accept, but imposes a condition – no one but Mícha’s son will be allowed to wed Mařenka. Kecal agrees, and rushes off to prepare the contract. Alone, Jeník ponders the deal he has apparently made to barter his beloved (“When you discover whom you’ve bought”), wondering how anyone could believe that he would really do this, and finally expressing his love for Mařenka.

Kecal summons the villagers to witness the contract he has made (“Come inside and listen to me”). He reads the terms: Mařenka is to marry no one but Mícha’s son. Krušina and the crowd marvel at Jeník’s apparent self-denial, but the mood changes when they learn that he has been paid off. The act ends with Jenik being denounced by Krušina and the rest of the assembly as a rascal.

Vašek expresses his confusions in a short, sad song (“I can’t get it out of my head”), but is interrupted by the arrival of a travelling circus. The Ringmaster introduces the star attractions: Esmeralda, the Spanish dancer, a “real Indian” sword swallower, and a dancing bear. A rapid folk-dance, the skočná, follows. Vašek is entranced by Esmeralda, but his timid advances are interrupted when the “Indian” rushes in, announcing that the “bear” has collapsed in a drunken stupor. A replacement is required. Vašek is soon persuaded to take the job, egged on by Esmeralda’s flattering words (“We’ll make a pretty thing out of you”). 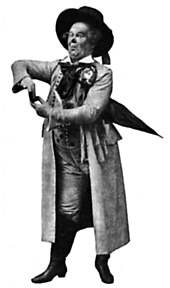 The opera singer Otto Goritz as Kecal, circa 1913

The circus folk leave. Vasek’s parents – Mícha and Háta – arrive, with Kecal. Vašek tells them that he no longer wants to marry Mařenka, having learned her true nature from a beautiful, strange girl. They are horrified (“He does not want her – what has happened?”). Vašek runs off, and moments later Mařenka arrives with her parents. She has just learned of Jeník’s deal with Kecal, and a lively ensemble (“No, no, I don’t believe it”) ensues. Matters are further complicated when Vašek returns, recognises Mařenka as his “strange girl”, and says that he will happily marry her. In the sextet which follows (“Make your mind up, Mařenka”), Mařenka is urged to think things over. They all depart, leaving her alone.

In her aria (“Oh what grief”), Mařenka sings of her betrayal. When Jeník appears, she rebuffs him angrily, and declares that she will marry Vašek. Kecal arrives, and is amused by Jeník’s attempts to pacify Mařenka, who orders her former lover to go. The villagers then enter, with both sets of parents, wanting to know Mařenka’s decision (“What have you decided, Mařenka?”). As she confirms that she will marry Vašek, Jeník returns, and to great consternation addresses Mícha as “father”. In a surprise identity revelation it emerges that Jeník is Mícha’s elder son, by a former marriage – the “worthless good-for-nothing” earlier dismissed by Kecal – who had in fact been driven away by his jealous stepmother, Háta. As Mícha’s son he is, by the terms of the contract, entitled to marry Mařenka; when this becomes clear, Mařenka understands his actions and embraces him. Offstage shouting interrupts the proceedings; it seems that a bear has escaped from the circus and is heading for the village. This creature appears, but is soon revealed to be Vašek in the bear’s costume (“Don’t be afraid!”). His antics convince his parents that he is unready for marriage, and he is marched away. Mícha then blesses the marriage between Mařenka and Jeník, and all ends in a celebratory chorus.

Prodaná nevesta on a dvd from Styriarte Festival in Graz, Austria