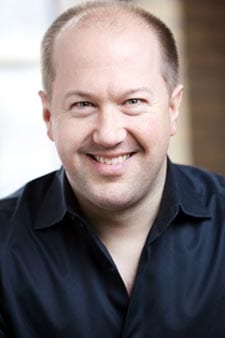 Brian Frutiger known for bringing multi-layered characterizations and physical skill of a classically trained actor to his interpretations, character tenor Brian Frutiger is much in demand as a singing actor, having appeared in over 100 roles in opera, operetta, music theater and theater.

In the 2008-2009 season, Brian Frutiger made his Metropolitan Opera debut as Poisson in Adriana Lecouvreur. Since then, Brian has returned to The MET every season to appear in a variety of roles including Benvolio in Romeo et Juliette, several roles as a part of the Ensemble of William Kentridge’s critically acclaimed production of Shostakovich’s The Nose, Boyar in Attendance in Boris Godunov, one of the servants in Capriccio, and stepped in for an indisposed colleague as Scaramuccio in Ariadne auf Naxos. This past season Brian returned to The MET to reprise his roles in THE NOSE.

In addition to his roles at The MET, Mr. Frutiger has sung many of the great character and spieltenor roles at opera houses across the United States. Highlights include El Remendado (Carmen) at San Francisco Opera; Goro (Madama Butterfly) at Sarasota Opera, Opera Memphis and Opera Coeur d’Alene; Tanzmeister (Ariadne auf Naxos) at Sarasota Opera; Bardolfo (Falstaff) at Opera Omaha; Pang (Turandot) at Connecticut Opera and Sacramento Opera; and both Don Basilio and Don Curzio (Le Nozze di Figaro) with Wichita Grand Opera.

Brian regularly returns to the professional theater where he has appeared as Robert Steele and Mr. Oscar in the critically acclaimed west coast premiere of Ahrens and Flaherty’s Dessa Rose at TheatreWorks, Mitch Mahoney in Theater Latté Da’s acclaimed production of The 25th Annual Putnam County Spelling Bee, Metellus Cimber (Julius Caesar) with Shakespeare’s Motley Crew in Chicago, Jamie (My Fair Lady) and Anselmo (Man of La Mancha) with Music Theatre of Wichita, and the ensemble of The Student Prince with Paper Mill Playhouse.

Equally at home on the concert stage Mr. Frutiger has appeared with the San Francisco Symphony as Le Troisième Messager in Stravinsky’s Le Rossignol under the baton of Michael Tilson Thomas, and Der Jüngling in Schumann’s Das Paradies und die Peri under the baton of Ingo Metzmacher.

A native Kansan, Mr. Frutiger has won several awards including a Kansas Cultural Trust Enabling Grant, 2nd Place at the Heinz Rehfuss Singing Actor Awards (sponsored by Orlando Opera), the Mann Fellowship, and he has competed at the Regional Level of the Metropolitan National Council auditions.