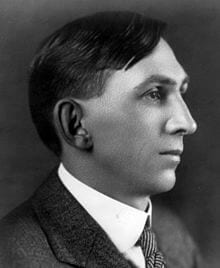 Charles Cadman’s musical education, unlike that of most of his American contemporaries, was completely American. Born in Johnstown, Pennsylvania, he began piano lessons at 13.

Charles Cadman went to nearby Pittsburgh where he studied harmony, theory, and orchestration with Luigi von Kunits and Emil Paur, then concertmaster and conductor, respectively, of the Pittsburgh Symphony Orchestra. This was the sum of his training. He was named a national honorary member of Phi Mu Alpha Sinfonia music fraternity in 1915.
In 1908 Charles Cadman was appointed the music editor and critic of the Pittsburgh Dispatch.He was greatly influenced by American Indian music and went to Nebraska to make cylinder recordings of tribal melodies for the Smithsonian Institution. He lived with the Omaha and Winnebago tribes on their reservations, learning to play their instruments. He used elements of traditional music in the form of his compositions of 19th-century romantic music.

Publishing several articles on American Indian music, Charles Cadman was regarded as one of the foremost experts on the subject. He toured both the States and Europe giving his then-celebrated ”Indian Talk”. But his involvement with the so-called Indianist movement in American music contributed to some critics failing to judge his works on their own merits.

Charles Cadman eventually moved to Los Angeles. He helped to found and often performed as a soloist with the Hollywood Bowl Orchestra. He wrote the scores for several films, including The Sky Hawk, Captain of the Guard, Women Everywhere, and Harmony at Home. Along with Dmitri Tiomkin, he was considered one of Hollywood’s top film composers.

But Charles Cadman first and foremost was a serious composer who wrote for nearly every genre. His chamber music works are generally considered among his best. He introduced elements of ragtime music into the classical music format, anticipating Gershwin, Stravinsky, and Milhaud, among others. His Piano Trio, Op. 56, composed in 1913, drew the critics’ attention and praise for his innovations.

The Pageant of Colorado, a historical pageant with music composed by Cadman to a libretto by Lillian White Spencer, was produced in Denver, Colorado in May 1927 under the direction of dramatist and playwrightPercy Jewett Burrell, a fraternity colleague of Cadman.

Charles Cadman´s  opera The Sunset Trail (1922) was part of the touring repertoire of Vladimir Rosing’s American Opera Company. He also composed music for Da O Ma, an opera based on Omaha traditions, with a libretto written by Nelle Richmond Eberhart and Francis La Flesche, an Omaha ethnologist with the Smithsonian.