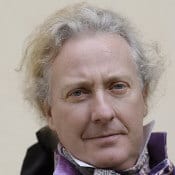 French tenor Christophe Mortagne made his Royal Opera debut in 2010 as Guillot de Morfontaine (Manon) and has since returned to sing Monsieur Triquet (Eugene Onegin) for The Royal Opera. In the 2015/16 Season he sings King Ouf I (L’Etoile) for the Company.

Mortagne was born in France and studied at the Paris Conservatoire. He has worked in opera with directors including David Alden, Kasper Holten and Laurent Pelly, and with conductors including Fabio Luisi, Antonio Pappano and Vasily Petrenko. Mortagne specializes in character tenor roles, with engagements including Guillot de Morfontaine for the Metropolitan Opera, New York, and for La Scala, Milan, Monsieur Triquet for Opéra de Lyon, Le Roi Ouf I (Chabrier’s L’Étoile) for Frankfurt Opera, Spoletta (Tosca) for the Chorégies d’Orange Festival, broadcast live on TV France, and Le Fellah and First Vendor (Rabaud’s Mârouf, savetier du Caire) for the Opéra-Comique.

Mortagne also works as an actor and has been a member of the prestigious Comédie-Française and performed at many French theatres. His recordings include a DVD of Eugene Onegin (The Royal Opera/Opus Arte).