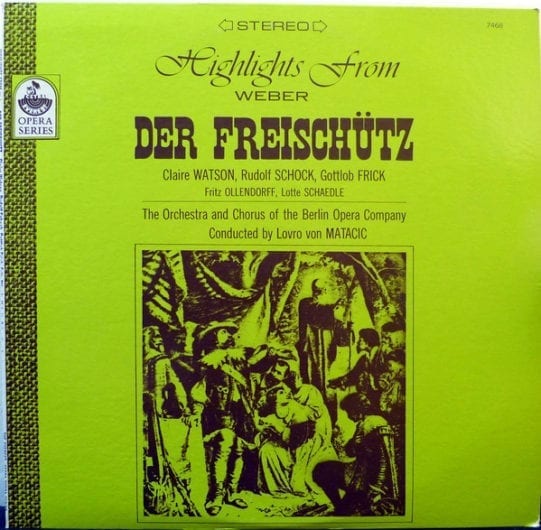 Claire Watson born in New York City, she studied at the Eastman School of Music in Rochester, and later privately with Elisabeth Schumann and Sergius Kagen, in New York. She then left for Europe, where she studied in Vienna with Otto Klemperer. She made her stage debut in Graz, as Desdemona, in 1951.

Born in New York City, she studied at the Eastman School of Music in Rochester, and later privately with Elisabeth Schumann and Sergius Kagen, in New York. She then left for Europe, where she studied in Vienna with Otto Klemperer. She made her stage debut in Graz, as Desdemona, in 1951.

She was engaged by the Frankfurt Opera in 1955, where she sang a wide range of roles, notably: Countess Almaviva, Pamina, Elisabeth, Leonora, Aida, Tatyana, Fiordiligi, Elisabeth de Valois, and the Die Marschallin, in which role she made her debut at the Royal Opera House in London in 1958, and at the Glyndebourne Festival in 1960.

In 1958, she became a member of the Bavarian State Opera in Munich, where she sang as Eva and Sieglinde. She also made regular guest appearances in Berlin, Vienna, Salzburg, Milan, also appearing in America, notably in San Francisco, Chicago, and Buenos Aires. In 1971, Watson performed in Boston for the Peabody Mason Concert series.[1]

A singer of considerable warmth, musicality and sincerity, Watson was also greatly admired as Ariadne, the Countess in Capriccio, and especially as Ellen Orford in Peter Grimes, of which she left a memorable recording, conducted by Benjamin Britten himself.

She can also be heard on other recordings: as Agathe in Der Freischütz, under Lovro von Matačić, as Donna Anna in Don Giovanni, opposite Nicolai Ghiaurov and Nicolai Gedda, under Otto Klemperer, as well as Eva in a live recording of Die Meistersinger von Nürnberg, under Joseph Keilberth. She also sang the Countess in the famous Karl Bohm DVD recording of ”Le Nozze di Figaro” from the Salzburg Festival of 1966 with Ingvar Wixell, Reri Grist, Walter Berry and Edith Mathis.

Watson died of a brain tumor in 1986 in Utting, Ammersee, Germany.

Born Claire McLamore in New York City, this lyric/dramatic soprano achieved her greatest successes in Europe, particularly in Munich where she was a revered presence even after retirement. In building a career, she had to battle opposition from her first husband, a doctor of biophysics, who was uncomfortable with her pursuit of engagements away from her home in Rochester, NY. A contract in Frankfurt, where she worked with Georg Solti, led to numerous other Continental bookings, however, and her success was assured.

Following initial studies at the Eastman School of Music, Watson traveled to New York in 1948 to work with Elisabeth Schumann and Sergius Kagen. Schumann informed her that, although she was not wrong to study Lieder, her voice really suited her to the lyric stage and suggested that she begin study of Octavian (Strauss’s Der Rosenkavalier). After a successful audition with Otto Klemperer, the young soprano accompanied the conductor to Europe to benefit from his coaching. At a party in Vienna, Watson was heard by bass Emmanuel List, who invited her to travel to Graz where he knew the director. Watson was engaged and asked to open the season in six weeks as Desdemona. The frantic singer flew back to the United States where she approached Schumann for some rush-order coaching. Her debut having been successful, she was given a contract for three more roles, but a demand from her husband that she return home put a temporary halt to her European activities. After the birth of a fourth child, Watson realized that her life belonged to the stage and auditioned successfully for the role of Elettra in a Juilliard production of Idomeneo. She hired an agent who then arranged three auditions for European houses. All three produced offers of contracts and Watson chose Frankfurt.

Under Solti, her first year at Frankfurt offered her 11 roles, ranging from Aida to Tatyana in Eugene Onegin. In 1958, Watson was chosen to sing Mozart’s Countess for the reopening of Munich’s exquisite Cuvillies Theatre. Her triumph in the role was so complete that she elected to begin residing in Munich, remaining there for the rest of her career and beyond.

Vienna had called her in 1957, and she appeared there as Aida, beginning a long association with that city. Appearances at other theaters came quickly thereafter. London saw her Marschallin in 1958, Glyndebourne in 1960 (alternating in the role with Régine Crespin). Her Italian career took her to Venice, Rome, Florence, and Milan’s La Scala, frequently in Wagner roles. Watson’s American career was more limited, taking her to San Francisco (Elisabeth in Don Carlo and Mozart’s Countess), Chicago (Donna Anna and Pamina), New Orleans (Ariadne, Arabella, and Elsa), Pittsburgh (Elisabeth and Senta) and a concert performance of Ariadne auf Naxos with the Boston Symphony. She was unable to agree with the Metropolitan Opera on repertory and never sang there.

Aided by her association with Solti, Watson made a number of significant recordings. Peter Grimes, under the composer’s direction, has not left the catalog since its initial release in 1958. Solti used her in his landmark recording of Wagner’s Ring and Klemperer engaged her for his recording of Don Giovanni. An overly-prominent vibrato keeps these examples of her work from entering the top-most level, but one is always conscious of a discriminating and musical mind informing her singing.