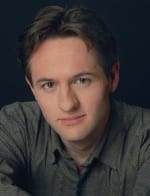 Edward Mout is a tenor who has been praised for his entertaining stage presence and his “mellifluously youthful tenor”.

In 2015 he performed Bob Boles in Peter Grimes with Opéra de Nice and covered the roles of Torquemada in L’heure espagnole and Le théière/Le petit vieillard/La rainette in L’enfant et les sortilèges with Glyndebourne Festival Opera.  In the 2015-16 season, he continues in the Hannover ensemble as 1. Inquisitor/Alchemist/1. Señor/Sultan Achmet in Candide and Wirt in Der Traumgörge, and he will make his role and house debut with Staatstheater Nürnberg as Skuratov in Z mrtvého domu (From the House of the Dead) by Janacek.

In 2011, Edward performed the Four Servants in Les Contes d’Hoffmann and Tobias Ragg in Sweeney Todd with the Wolftrap Opera Company and he returned to Lyric Opera of Chicago as Tanzmeister in Ariadne auf Naxos and Simpleton in Boris Godunov. In the 2010-2011 season, Edward made his debut with the Metropolitan Opera as Postiglione in La fanciulla del west.  Edward is an alumnus of the prestigious Lyric Opera of Chicago’s Ryan Opera Center where in the 2007-2008 season he was seen in productions of La Boheme and La Traviata and stepped in for Count Almaviva for one performance of Il barbiere di Siviglia as well as performing the role in student matinee performances.

For the 2008-09 season, he was seen in Manon, performed Shepherd in Tristan und Isolde, and played Beppe in student matinees of I Pagliacci.  Edward was engaged as a Resident Artist with the Minnesota Opera from 2005-2007, where he performed Don Ottavio in Don Giovanni.  He has also been an apprentice artist with various summer opera festivals, including Central City Opera, where he returned as Orpheus for the 2010 production of Orpheus in the Underworld.

He has previously performed in the United States with the Peoria Symphony (Beethoven Symphony IX), San Diego Chamber Singers (Carmina Burana), and Northwest Symphony (Tony/excerpts from West Side Story), and also in Costa Rica with the Orquestra Sinfonica Nacional de Costa Rica in Bach’s B-Minor Mass under the baton of John Nelson.  His concert work in the 2014-2015 season includes Mendelssohn’s Paulus with the Nürnberger Bach-Orchester and Jonathan Dove’s oratorio There was a Child with the La Jolla Symphony and Chorus in San Diego.