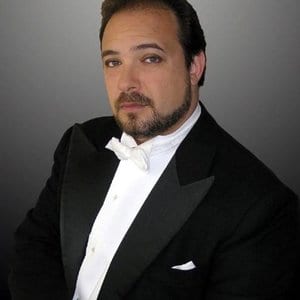 2012/2013 is a busy year for Emmanuel di Villarosa. He has accepted a fest engagement with the Landestheater Detmold where he just premiered as Don José in Carmen to rave reviews. This engagement is an interesting one for Emmanuel as he will create the roles, for the first time in his career, of Manrico in Verdi’s Il Trovatore and Macduff in Macbeth. He will also sing Alfredo in La Traviata. He divides his time with the Prague State Opera where he sings Calaf in Turandot, Mario Cavaradossi in Tosca and Turiddu/Canio in Cavalleria Rusticana /Pagliacci. He will also fly to Lyon to sing a performance of Rodolfo in La Boheme.

2011/2012 begins with Emmanuel di Villarosa making his debut with the State Opera in Prague as Mario Cavaradossi by way of a tour of Tosca in Japan. Following this, he is off to Athens, Greece to make his debut as Riccardo in Verdi’s Un Ballo In Mascera with the Greek National Opera. The highlight of this season was Emmanuel’s debut with the prestigious Teatro Colón as Alvaro in Verdi’s La Forza Del Destino in Buenos Aires, Argentina.

The 2010/2011 Season began with Emmanuel di Villarosa making his debut as Des Grieux in Puccini’s Manon Lescaut with the Den Jyske Opera touring company, where he sang 10 performances of Puccini’s most demanding tenor role, throughout Denmark. Later in the season he sang Calaf in Puccini’s Turandot with the Theater Hagen, in Hagen, Germany.

The 2009/2010 began with the Release of Emmanuel’s CD “From the Bottom of My Heart”, a compilation of Arias, and Neapolitan love songs. Emmanuel began his performance schedule in Poznan, Poland where he debuted the demanding title role of Verdi’s Ernani at the Teatr Wielki in Poznan. He returned to Poznan to sing the title role in Verdi’s Don Carlo and Pollione in Bellini’s Norma. He then traveled to Bielefeld, Germany and sand fifteen performances of Don José in Bizet’s Carmen. He ended the season with a return engagement in New York with the Caramoor Music Festival singing Pollione in Norma under the baton of noted conductor Will Crutchfield.

To start the 2008/09 opera season Emmanuel made an important debut as Alvaro in Verdi’s original version of La Forza Del Destino with the renowned Caramoor Summer Festival under the baton of Maestro Will Cruchfield. Emmanuel brought the house down with his third act rendition of “La vita inferno all’infelice.”
Reviews for Emmanuel’s portrayal of Alvaro were unanimously favorable. The New York Times said, “As Alvaro, the tenor Emmanuel di Villarosa sang passionately, with plenty of ringing top notes.”

Emmanuel di Villarosa was invited back as the main focal point in 2008/09 opera season with the Theater Kiel in Kiel, Germany. He began with the Premiere of the five act version of Verdi’s Don Carlo, title role; and then continuing with the reprise as Calaf in Puccini’s Turandot and as Don José in Bizet’s beloved Carmen.
Calaf in Puccini’s Turandot is a role that has brought him much acclaim in Europe with the Bremer Theater, Stadttheater Giessen. His performances with the Bremer Theater were for the grand reopening of their newly renovated opera house.

Emmanuel di Villarosa also returned to the Teater Wielki in Warsaw, Poland to sing Edgardo in Lucia Di Lammermoor and Hoffmann in Offenbach’s Les Contes d’Hoffmann. He also made debuts with the National Theater Weimar, Weimar, Germany, as Cavaradossi in Puccini’s Tosca, in Bremerhaven, Germany as Calaf in Turandot and with the Theater Hagen in Hagen, Germany as the Duke in Verdi’s Rigoletto.

Last season 2007/08, Emmanuel added two additional roles to his vast repertoire. First, as Ismaele in Verdi’s Nabucco, where he made an important house debut with Oper Frankfurt and, second as Hoffmann in Offenbach’s Les Contes d’Hoffmann with the Teatr Wielki, Warsaw Poland. Emmanuel’s “Hoffmann” was such a great success that he was immediately re-engaged to sing Edgardo in Lucia Di Lammermoor later in the same season.

Emmanuel was also re-engaged with the Theater Kiel, as Don José in Bizet’s beloved Carmen as well as Calaf in Puccini’s Turandot, where he had a highly successful run as Alvaro in Verdi’s La Forza Del Destino in the 2006/07 opera season.

Emmanuel made a national commercial for Jeep Cherokee where he played the part of the Good Samaritan while singing an excerpt from La Boheme.
Career highlights have included a debut with the Metropolitan Opera in The Gambler, and War and Peace (live radio broadcast), Pollione in Norma at the Staatstheater Stuttgart, the title role in Don Carlo with the Nationaltheater Mannheim.

The lovelorn and adored Rodolfo has subsequently become his signature role. In the 2006/07 season, Emmanuel also made house debuts again as Rodolfo in La Boheme with Staatstheater Wiesbaden and the title role in Don Carlo, Cavaradossi in Puccini’s Tosca, Opern Darmstadt, and Rodolfo in Puccini’s La Boheme where he was invited back for his much-loved rendition at the Badisches Staatstheater Karlsruhe.

Emmanuel di Villarosa made his European debut with Austria’s Landestheater Linz as Tamino in Die
Zauberflote where he spent three seasons as a fest singer performing a variety of roles which included the title role in Don Carlo, Don José in Bizet’s Carmen, Cavaradossi in Tosca, the title role in Gounod’s Faust, as Jenik in The Bartered Bride, and Edgardo in Lucia Di Lammermoor.

Other notable performances include a debut with Dallas Opera as Alfredo in La Traviata (student performances), additional appearances with the Bremer Theater as The Duke in Rigoletto, the title role in Faust with Sarasota Opera; Roméo in Romeo et Juliette with Connecticut Opera, the Duke in Rigoletto and Edgardo in Lucia Di Lammermoor with Dicapo Opera Theatre, and Alfred in Dir Fledermaus with Central City Opera. Emmanuel began his career with the intimate and adored Amato Opera in New York City.

Concert highlights have included appearances with the Colorado Symphony at the Red Rocks Amphitheater, Concert performances with the renowned Dusseldorf Symphony Orchestra and as a guest artist for the live PBS telecast at the GEORGIA MUSIC HALL OF FAME AWARDS with Trisha Yearwood and The B-52s. Other roles have included Nemorino in L’elisir d’amore, Pinkerton in Madama Butterfly, Ruggero in La Rondine, Rinuccio in Gianni Schicci, Valere in Tartuffe, Edward in Patience and Sarah, and Andrew in A Death In The Family.

Emmanuel majored in voice at the Manhattan School of Music where he was a full tuition scholar.
He is married and has two young boys ages 11 and 7.

Later in the spring he will also sing in a Puccini gala where the will sing over 35 guest performances with the Theater Kiel. Poland to sing Lucia Di Lammermoor, Hoffmann in Offenbach’s debut with National Theater Weimar as Cavaradossi in Puccini’s.

Emmanuel made an important debut as Alvaro in Verdi’s original renowned Caramoor Summer Festival under the baton of Maestro with his third act rendition of “La vita inferno all’infelice”, Emmanuel di Villarosa sang passionately, with plenty of ringing.

Last season 2007/08, Emmanuel added two additional roles Nabucco, where he made an important house debut with Les Contes d’Hoffmann with the Teatr Wielki, Warsaw success that he was immediately re-engaged to sing Edgardo.