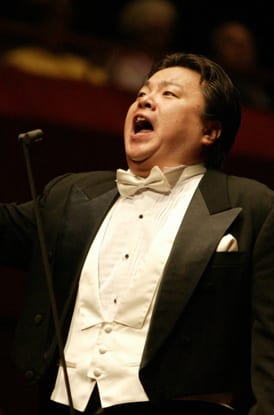 Francesco Hong is born in Seoul (South Korea) in 1972, Hong Sung-Hoon (FRANCESCO HONG) (Calaf) has studied at the University Kyung-Hee in Seoul. In 2002 he moved to Italy to increase his knowledge of technique and Italian operatic repertoire. He is currently studying with Paolo Barbacini. He won the 55th Viotti Competition in Vercelli, which gave him the chance to make his debut at Teatro Regio in Parma.

In the role of Duca in Rigoletto. Since then Hong has made a brilliant career in many prestigious venues such as the Teatro Comunale in Bologna and the Teatro Verdi in Trieste. He debuted also at the Konzerthaus in Vienna in La Wally by Catalani. At Carlo Felice of Genoa in the First Symphony by Scriabin, and in Palermo in Turandot.

After a huge personal success in performances of Il trovatore for the Circuito Lirico Lombardo, he participated in Rigoletto with Renato Bruson in Trieste (Teatro Verdi), and again with Daniel Oren in Pordenone, Udine, and Gorizia.

In January 2007 he debuted with Tosca at Frankfurt Oper  and he returned to the same opera house for Don Carlo (June 2008). A requested tenor in the most important international venues, Francesco Hong has performed the role of Alvaro (La forza del destino) with great success at Teatro Carlo Felice in Genoa with Daniel Oren.

Followed by his debut at the Teatro Real de Madrid as Manrico (Il trovatore). Several galas in Germany (including Alte Oper in Frankfurt and Wiesbaden). Turandot (Calaf) in Santa Cruz de Tenerife. La forza del destino for his debut at Maggio Musicale Fiorentino with Zubin Mehta. Norma at Teatro Massimo in Palermo. Rigoletto in Piacenza and Modena (alongside Leo Nucci). Il trovatore at Teatro Bellini in Catania, as well as Un ballo in maschera again at Teatro Real de Madrid.

He has performed Calaf in Torre del Lago, Rovigo, Bolzano, Livorno, Valencia (under Lorin Maazel. Savonlinna Festival (Finland), and as his debut at Arena di Verona. In January 2009 he made a huge success debuting at Teatro alla Scala of Milan as Don Carlo under the baton of Daniele Gatti. On February 2009 he made his debut in the U.S.A. as Calaf in Philadelphia’s Turandot. Conducted by Maurizio Barbacini with Francesca Patanè in the title role.

He has sung Norma in Bilbao for the opening of the 2009/10 season.  Trieste for Il trovatore, opening the 2009/10 season conducted by Maurizio Barbacini. He made his debut at Staatsoper Wien in December 2009 with La forza del destino.

In 2010 he sang in Guangzhou (China) in Turandot, with conductor Lorin Maazel. Followed by Norma in Madrid, Copenhagen, and Stockholm, and recitals and galas in Denmark and Germany. His recent performances as Manrico at Teatro Regio of Parma, conducted by Yuri Temirkanov, marked a huge personal success. Next he will sing Turandot in Las Palmas, Los Angeles, and Oviedo, Aida in Santiago (Chile), Cavalleria and Pagliacci in Copenhagen, and Luisa Miller in Tel Aviv.