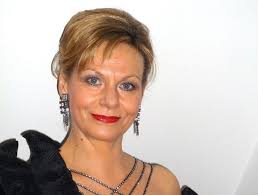 Gabriele Fontana the austrian soprano  marked her debut at the age of 21 as Pamina in the Frankfurt Opera House under the baton of Michael Gielen, she already was a Member in the Opera Studio at the Vienna State Opera, and had won the Bachprize at the international Competition in Leipzig, and the R.Tauber Memorial Prize in London.

Since 1997 she made such major Debuts as MARSCHALLIN/Staatsoper unter den Linden and Hannover, Madelaine/Capriccio at the Nederlandse Opera Amsterdam and Hannover, Eva/ Deutsche Oper Berlin,Hannover,and ELSA.She had a huge personal success in her debut as Senta in 2002 in Malmö/Sweden.
She has appeared in Recitals and Concerts in New York, Washington and Philadelphia(with W.Sawallisch),Manchester and Prag (4Last Songs)and Vienna Musikverein.

In 2003 she celebrated her Debuts with Accademia di Santa Cecilia Rome with “Mahler 8” (Chung) and “Paradies und Peri”/PERI with W.Sawallisch.
She returned in February 2003 to the Munich State Opera to sing ROSALINDE with Z.Mehta, celebrated her Debut as Vitellia/Titus at the Semper Opera Dresden, and with a huge personal success Leonore/Fidelio in Lyon.

Since 2003 she had major Debuts with Euryanthe/Amsterdam/Edinburgh/Dresden,Köln and Brussels, Senta/Marseille, Elsa, Sieglinde in Marseilles/Lyon, Arabella in Graz, Marschallin/Staatsoper Berlin, /Leipzig/ Dresden/ Taipeh, Kaiserin in Frankfurt and Amsterdam, Chrysothemis in Amsterdam and Dresden, Capriccio/Amsterdam/Dresden/ Edinburgh Festival, Maria Stuarda/Maria in Geneva and Baltimore, and over all- Fidelio in Lyon, Leipzig, Tokio, Moskau , St.Petersburg ,Baden-Baden and Frankfurt.

In 2006 she celebrated her Debut as Gutrune (Götterdämmerung) in the new Ring production at Bayreuth with Thielemann.

From October 2007 on she teaches Lied and Oratorio at the Music University in Vienna.