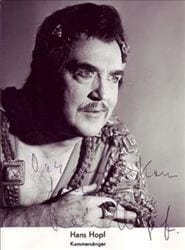 Hans Hopf made his debut in 1936 at the Bayerisches Landestheater and then sang in Augsburg as a lyrical tenor, but since he came to Dresden in 1942, he began to appear in heroic parties. In 1946-49 he was involved in the Deutsche Staatsoper in Berlin, after which he came to the Bayerische Staatsoper in Munich, which became the center of the rest of his career. He also guest starred on the big stages, among others. as Otello, Tristan, Siegfried and the Emperor in Die Frau ohne Schatten.

Hans Hopf (August 2, 1916, Nuremberg – June 25, 1993, Munich) was a German operatic tenor, one of the leading heldentenors of the immediate postwar period. He sang Walther von Stolzing in the Bayreuth Festival’s Die Meistersinger, every year from 1951 to 1955.

At Bayreuth in 1951 he took part in a performance of Beethoven’s 9th Symphony conducted by Wilhelm Furtwängler. He sang Max at the Salzburg Festival in 1954. He made guest appearances in Milan, London, New York, and Buenos Aires. He sang both Siegfrieds in the early 1960s at Bayreuth, the Met, and elsewhere, recording Tannhäuser twice in 1960.

A singer with a sturdy and reliable voice, Hopf also won acclaim in a number of Italian operas notably Verdi’s Otello, and the Emperor in Die Frau ohne Schatten.