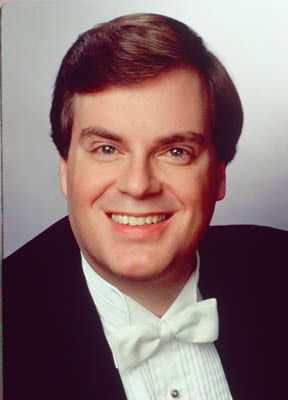 The American tenor, John Aler, studied with Rilla Mervine and Raymond McGuire at the Catholic University of America in Washington D.C., receiving M.M. in 1982. He also studied with Oren Brown at the American Opera Center at the Juilliard School in New York from 1972 to 1976, with Marlene Malas, and at the Berkshire Music Center in Tanglewood. In 1977 he made his operatic debut as Ernesto at the American Opera Center, the same year he won 1st prizes for men and for the interpretation of French art song at the Concours International de Chant in Paris.

John Aler has been singled out as one of the most acclaimed lyric tenors on the international stage. In opera he has performed with most of the major companies and opera houses in Europe including the Royal Opera House Covent Garden, Deutsche Oper Berlin, Staatsoper Vienna, Bayerische Staatsoper, Salzburg Festival, Hamburg, Geneva, Madrid, Lyon and Brussels as well as the New York City Opera and the operas of St Louis, Santa Fe, Washington DC and Baltimore in the USA.

John Aler’s 1998-1999 season began with performances of Messian’s opera Saint François d’Assise at the Salzburg Festival and in Lucerne, L.v. Beethoven’s Mass in C with the Florida Philharmonic under James Judd, and recitals at the Newport Festival. He will also travel to the Netherlands for performances of Proust in Paris with the Da Camera Society, sing L.v. Beethoven’s Ninth Symphony with the New York Philharmonic and Kurt Masur and travel to Mexico’s Cervantino Festival. This will be followed by performances with the Berliner Philharmoniker under Kurt Masur in Honnegger’s Jeanne d’Arc au bûcher, and with the Orchestre de Lyon and Emmanuel Krivine in Berlioz’s L’enfance du Christ, also performed in Bamberg, Germany.

Other major performances this season include Corigliano’s Dylan Trilogy with Leonard Slatkin and the National Symphony Orchestra in Washington and the Carnegie Hall, as well as performances of Ravel’s L’enfant et les sortilèges and L’Heure Espagnole with the Cleveland Orchestra and Pierre Boulez in Cleveland and Carnegie Hall.

1997-1998 highlights included performances as The Evangelist in J.S. Bach’s Saint Matthew Passion (BWV 244) with the New York Philharmonic Orchestra under Kurt Masur; performances of Gabriel Pierné’s The Children’s Crusade with the National Symphony Orchestra in Washington under Leonard Slatkin and the New York première of this work at Carnegie Hall. John Aler also joined Kurt Masur and the Israel Philharmonic Orchestra in Avery Fischer Hall celebrating the 50th Anniversary of the founding of the State of Israel.

John Aler has made over fifty recordings. Soon to be released is an Arabesque Recording of Haydn’s opera L’Isola disabitata with the Padua Chamber Orchestra conducted by David Golub. Recent releases include Adolphe Adam’s Le Toreador under Richard Bonynge with the Welsh Opera Orchestra for Decca; Berlioz Te Deum with the Voices of Ascension Chorus and Orchestra for Delos International; a solo collection on Delos entitled “Songs We Forgot to Remember”; the Glyndebourne Opera recording of The Merry Widow on EMI; a collection of songs by Berlioz for Deutsche Grammophon and Igor Stravinsky’s Pulcinella and Renard, with the Saint Paul Chamber Orchestra and Hugh Wolff for Teldec.