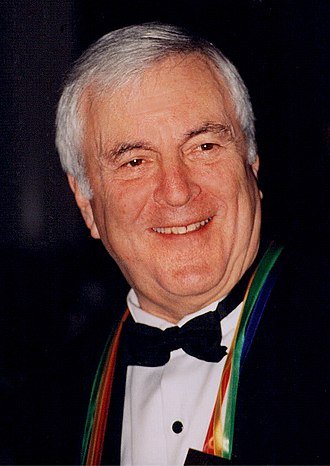 John Harold Kander (born March 18, 1927) is an  American composer , known largely for his work in the musical theater. As part of the songwriting team  Kander and Ebb (featuring lyricist Fred Ebb), Kander wrote the scores for 15 musicals, including Cabaret (1966) and Chicago (1975), both of which were later adapted into acclaimed films. He and Ebb also wrote the standard “New York, New York” (also known as “Theme from New York, New York”).

His father, Harold S. Kander, worked in his father-in-law’s egg and poultry business, while instilling a love of life and a healthy interest in the arts  in John and his brother, Edward. His parents regularly brought their two sons to local theater and orchestra concerts, and every year treated them to a trip to New York City to see theater.

Kander attended his first opera performances at the age of nine, when the San Carlo Opera came to Kansas City with their productions of Aida and Madama Butterfly. According to Kander, “My mother took me and we sat in the first row. There were these giants on the stage, and my feet were dangling over my seat. It was overwhelming for me, even though I could see the strings that held the beards on the Egyptian soldiers…. My interest in telling a story through music in many ways derived from early experiences like those.”

Kander was raised in Kansas City, and attended Westport High School, before transferring to the Pembroke Country-Day School. During the 1940s, Kander joined the United States Merchant Marine Cadet Corps. After completing his training in California and sailing between San Francisco and Asia, Kander left the Corps on May 3, 1946.

However, due to rule changes governing national service, he was forced to enlist in the Army Reserves in September of the same year, after having already completed one semester at the Oberlin Conservatory of Music. During the Korean War, Kander was ordered back into active duty, but he was forced to remain in New York City for six months of observation after a medical physical revealed scars on his lungs. He was officially discharged on July 3, 1957.

Following his studies, Kander began conducting at summer theaters before serving as a rehearsal pianis  for the musical West Side Story by Leonard Bernstein and Jerome Robbins in New York. While working, Kander met the choreographer, Jerome Robbins, who suggested that Kander compose the dance music for the show in 1959.[citation needed] After that experience, he wrote dance arrangements for Irma la Douce in 1960

Kander’s first produced musical was A Family Affair in 1962, written with James and William Goldman. The same year, Kander met Fred Ebb through their mutual publisher, Tommy Volando.  The first song Kander and Ebb wrote together, “My Coloring Book,” was made popular by a recording from Sandy Stewart and their second song, “I Don’t Care Much,” was made famous by Barbra Streisand, and Kander and Ebb became a permanent team.

In 1965, Kander and Ebb wrote music for their first show on Broadway, Flora the Red Menace, produced by Hal Prince, directed by George Abbott, and with book by George Abbott and Robert Russell, in which Liza Minnelli made her Broadway debut.

Kander and Ebb have since been associated with writing material for both Liza Minnelli   and Chita Rivera (including the musicals Zorba, Chicago, The Rink, and Kiss of the Spider Woman) and have produced special material for their appearances live and on television, such as Liza with a Z.

The Broadway musicals Cabaret and Chicago have been made into films. The film version of Chicago won several 2002 Academy Awards, including for best picture, film editing, costume design, art direction and sound.  In his musicological and biographical study of the collaboration of Kander and Ebb, James Leve discusses the full history of Cabaret and Chicago in chapters titled “The Divinely Decadent Lives of Cabaret” and “Chicago: Broadway to Hollywood.”

As Leve notes, Cabaret, which is a musical adaptation of Christopher Isherwood’s The Berlin Stories, was an “ideal vehicle for Kander and Ebb’s brittle and self-referential brand of musical theater.”  This insight also holds true for Chicago.

Kander, along with Ebb, also wrote songs for Thornton Wilder’s The Skin of Our Teeth, and it was set to premiere in London, but the rights were pulled by Wilder’s nephew. He also says that Harvey Schmidt and Tom Jones, the writers of The Fantasticks, wrote a musical of Wilder’s Our Town and it took them thirteen years to write, only to have the rights pulled as well by the nephew.

Kander’s first musical without Ebb in many years, The Landing, with book and lyrics by Greg Pierce, premiered Off-Broadway at the Vineyard Theatre on October 23, 2013. ] The musical, which was a series of three “mini-musicals” was directed by Walter Bobbie and starred David Hyde Pierce and Julia Murney.

Kander’s musical Kid Victory, with book and lyrics by Greg Pierce, had its world premiere February 28, 2015 at the Signature Theatre in Arlington, VA. Kid Victory premiered Off-Broadway at the Vineyard Theatre on February 1, 2017 in previews, and opened officially on February 22, 2017. Direction is by Liesl Tommy with choreography by Christopher Windom. The cast features Jeffry Denman and Karen Ziemba.

Kander (music) and David Thompson (lyrics) wrote the dance play The Beast in the Jungle which opened Off-Broadway at the Vineyard Theatre. The play is directed and choreographed by Susan Stroman, and features Tony Yazbeck and Irina Dvorovenko.  Kander collaborated with Lin-Manuel Miranda for Miranda’s Hamildrop series: “Cheering for Me Now” (lyrics Miranda and music Kander) is an uplifting track about New York’s ratification of the constitution.

In 2010, Kander married dancer and choreographer Albert Stephenson, his partner since 1977, in Toronto.  Kander’s grand-nephew, Jason Kander, was formerly the Missouri Secretary of State.

Kander and Ebb also contributed songs for the following movies:

Kander, like Ebb, is also a member of the American Theater Hall of Fame, having been inducted in 1991.
In 1998, Kander and Ebb received the Kennedy Center Honors award for Lifetime Achievement.

In 2018, Kander was awarded the Stephen Sondheim award by Tony-winning Signature Theater.