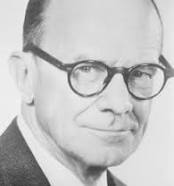 Nat Benchley, co-editor of The Lost Algonquin Roundtable, referred to him as ”the dean of American music.” Joseph Deems Taylor was born in New York City to JoJo and Katherine Taylor. He attended New York University.
Joseph Deems Taylor married three times. His first wife was Jane Anderson. They married in 1910 and divorced in 1918. In 1921, he married Mary Kennedy, who was an actress and a writer. They had a daughter, Joan Kennedy Taylor, in 1926, and divorced in 1934. Taylor married his third and final wife, costume designer Lucille Watson-Little, in 1945. They divorced eight years later.

Joseph Deems Taylor initially planned to become an architect;however, despite minimal musical training he soon took to music composition. The result was a series of works for orchestra and/or voices. In 1916 he wrote the cantata The Chambered Nautilus, followed by Through the Looking-Glass (for orchestra) in 1918, earning him public praise and recognition.
In 1921 Joseph Deems Taylor secured a job as music critic for the New York World, a post he held when approached by the Metropolitan Opera to suggest a composer to write a new opera. He put forth his own name, and was accepted, the result being The King’s Henchman, with the libretto by Edna St. Vincent Millay. Peter Ibbetson followed in 1929.

Joseph Deems Taylor’s compositions were met with great initial enthusiasm. The number of Metropolitan Opera performances for The King’s Henchman and Peter Ibbetson is greater than any opera of any other American composer, and he had as many large-scale works published as any of his American-born contemporaries. Taylor’s music is often witty, always deftly formed, well-timed, and entertaining.

The basic style of even his later works is academically post-Romantic, resisting any influence of progressive trends except perhaps in orchestration. This conservatism, lacking sharp individual profile or sense of deep conviction, may help to explain the initial enthusiastic acceptance of Taylor’s work but may also explain the fact that his music was virtually forgotten soon afterward.

Taylor was a promoter of classical music throughout his life. His journalism career included posts as music critic for the New York World beginning in 1921, and editor of Musical America from 1927 to 1929.

Taylor also worked extensively in broadcasting, and as intermission commentator for the New York Philharmonic. He appeared in Walt Disney’s 1940 film Fantasia as the film’s Master of Ceremonies, and was instrumental in selecting the musical pieces that were used in the film, including the then-controversial Sacre du Printemps. In the long-unseen roadshow version of Fantasia, issued on DVD in 2000, and re-released on the 2010 Fantasia/Fantasia 2000 Blu-ray release, all of Taylor’s voice-over work was redubbed by veteran voice artist Corey Burton.

The complete film was originally 124 minutes long, due almost entirely to the fact that Taylor’s commentaries were more detailed in the roadshow version, but the original audio elements for these longer commentaries had deteriorated to the point that they could no longer be used, so Corey Burton was selected to re-record all of the dialogue for consistency. The general release version of Fantasia, running 115 minutes, is the version most audiences are familiar with. In that version, Taylor’s commentaries were severely abridged.

He provided the commentary of the technical story behind the recording of actual cannon fire and carillon for the famous 1954 Mercury Records album, by Antal Dorati and the Minneapolis Symphony Orchestra, of Tchaikovsky’s 1812 Overture—still one of the most highly regarded recordings of that piece, and the best-selling classical LP of the 1950s.

Taylor also recorded commentary for other Mercury recordings: Benjamin Britten’s ”A Young Person’s Guide To the Orchestra”; the 1958 stereophonic re-make of the ”1812 Overture” and Frederick Fennell’s ground-breaking two-album ”The Civil War,” which featured original music played on period instruments and sound-montages, narrated by Taylor, of period weaponry and music.

He was also a frequent guest on the radio quiz program Information Please.

Taylor was the third president of ASCAP, and held the post for six years. The ASCAP Deems Taylor Awards were established in 1967 to honor his memory. The Deems Taylor Award ”recognizes books, articles, broadcasts and websites on the subject of music selected for their excellence.”

Taylor was also a friend of the Algonquin Round Table, a group of writers, actors and critics that met almost daily from 1919-1929 at Manhattan’s Algonquin Hotel. He briefly dated Dorothy Parker. In the 1994 film Mrs. Parker and the Vicious Circle, Taylor was portrayed by the actor James LeGros.Taylor’s other personal friendships ranged from composers George Gershwin and Jerome Kern to novelists F. Scott Fitzgerald and Ayn Rand.