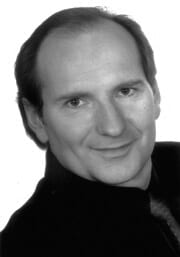 Born in Magdeburg, Jürgen Müller studied voice at the Musikhochschule Felix-Mendelssohn-Bartholdy in Leipzig. After first engagements in Gera and at the Oper Leipzig, invitations led him to Bern, Dresden, Lübeck, Regensburg, Essen, Stuttgart and Turin.

From 2000-2002 Jürgen Müller was a member of the Theater Meiningen where he made his successful debut as Hans/ “Die verkaufte Braut” and where he was highly acclaimed as Siegfried in a new production of “Der Ring des Nibelungen” under the baton of Kirill Petrenko.

From 2002-2004 the artist joined the ensemble of the Komische Oper Berlin. At his company he sang the main parts of his repertoire like Laca/“Jenufa”, Sergej/“Lady Macbeth von Mzensk“, Florestan/“Fidelio“ and the title roles in ”Peter Grimes” and “Der Zwerg“.

2003 Jürgen Müller made his debut as Stolzing/“Die Meistersinger von Nürnberg“ at the Opera Australia in Sydney. 2005 he had great success as Mefistofele in the new production of Busoni´s “Doktor Faustus“ at  the Staatsoper Stuttgart, 2006 he made his debut as Parsifal at the Concertgebouw Amsterdam. Moreover he sang a very successful Evangelimann at the Volksoper in Vienna where afterwards he did concert performances of  “Notre Dame“ as well as Max in the new production of “Der Freischütz“. This production led him also to the Oper Graz.

2006/07 Jürgen Müller had an outstanding success as Siegfried in the new production of the “Ring“ at Theater Dortmund where he sang also Canio/“I Pagliacci“. Furthermore the artist did Siegfried at the Tiroler Festspiele in Erl, and Mefistofele/“Doktor Faustus“ at the Berliner Staatsoper (with Daniel Barenboim).

After his debut at the Bayerische Staatsoper München as Tambourmajor in the new production of “Wozzeck“ (Andreas Kriegenburg / Kent Nagano) in 2008/2009, Jürgen Müller sang the same part at the Theater Thüringen in Gera, the title part in “Siegfried” at Theater Lübeck and Eisenstein/“Die Fledermaus“ with Operette Leipzig.

2011 he sang Max/“Freischütz“ in Toulon, Siegfried/“Siegfried“ and “Götterdämmerung“ at the Opera in Helsinki and in Lübeck. From 2011/12 on Jürgen Müller has been a regular guest at the Semperoper Dresden where he has sung Alwa/“Lulu“, Herodes/“Salome“, Offizier/“Cardillac“ as well as Florestan/”Fidelio”. Additionally, after his successful debut with Loge/”Das Rheingold” several productions are planned at the Nationaltheater Mannheim, among others “Siegfried“ and “Götterdämmerung“ under Daniel Ettinger.

Season 2012/13 brought him back to Helsinki National Opera (“Vec Makropulos”) and starting from season 2013/14 he will join the ensemble at Dresden Semperoper.

Jürgen Müller is also a regular guest on the concert stage, among others he did „Lied von der Erde“ at the Wiener Musikverein and at the Concertgebouw Amsterdam.