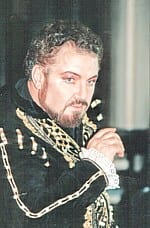 The young Bulgarian tenor Kaludi Kaludov began his international career in 1987 at the Vienna State Opera in the rôles of Foresto in Attila and Alfredo in La Traviata and, following this, with Cassio in performances of Otello under Zubin Metha opposite Plácido Domingo, appearing at the Hamburg State Opera in the same rôle, also with Domingo.

In the United States he made a strong impression with his portrayals of Vladimir in Borodin’s Prince Igor and Dimitri in Mussorgsky’s Boris Godunov. He has appeared in recent years in the major opera houses and concert halls of Europe in performances directed by conductors of the greatest distinction. He recorded his rôle in Boris Godunov for Balkanton and, under Emil Tchakarov, took part in recordings of Khovanshchina and Prince Igor for Sony, the second of these awarded the opera Grand prix du disque.