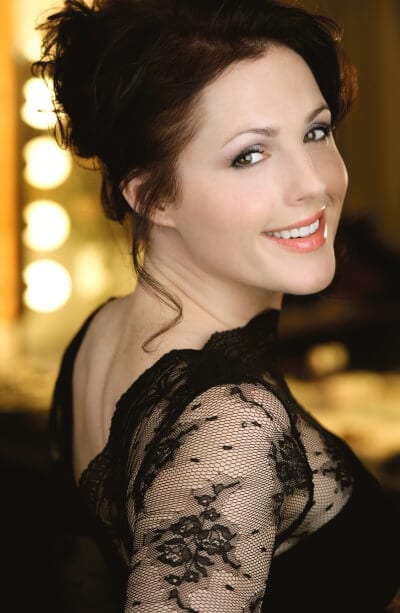 Soprano Leah Partridge has received consistent praise worldwide for her intelligent and compelling interpretations of opera’s most beloved heroines.  Opera Magazine praised her for her “clarity, accuracy, and poise,” and the Detroit Free Press has hailed her for her “lovely presence and shining voice.”  Since making her debut in 2003 as Lucia in Lucia di Lammermoor, Ms. Partridge has had a career full of remarkable milestones.

In the 2017-18 season Ms. Partridge revised the role of Helena in Paul Curran’s production of A Midsummer Night’s Dream by Benjamin Britten at the Teatro Massimo in Palermo, Sicily and had her role debut of Ellen Orford in Peter Grimes by Benjamin Britten in the Willy Decker production for the Palau de les Arts in Valencia, Spain.  Her 2016-17 performances were with the new and contemporary opera company, Onsite Opera in New York City where she performed Dominick Argento’s acclaimed one woman tour de force Miss Havisham’s
Wedding Night. Ms. Partridge made her stage debut of Puccini’s beloved Mimi in La Bohème with Opera Omaha and made her company debut as Diana with The Minnesota Opera in the Da Ponte opera L’arbore di Diana, a rare Mozart like comedy by composer Martín y Soler in January 2017.
Ms. Partridge is a graduate of Mercer University and The Indiana University Jacobs School of Music where she received the prestigious Wilfred. C. Bain Opera Fellowship. She won first place in the vocal competitions of Palm Beach Opera and Opera Birmingham and in 2004 was a National Semi-Finalist in the Metropolitan Opera National Council Auditions.  She is a member of the National Association of Teachers of Singing and teaches voice and yoga at The Voice Studio Atlanta.