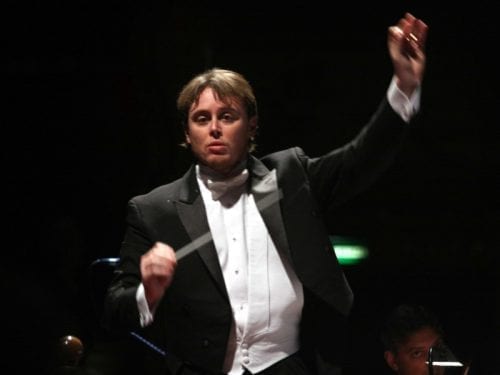 Michele Mariotti Musical Director of the Teatro Comunale di Bologna since 2014, Michele Mariotti was born in Pesaro. Following his classical studies he obtained a degree in music composition at the Rossini Conservatoire in Pesaro under the guidance of Maestro Benzi and a degree in orchestra conducting at the Accademia Musicale Pescarese with full marks and honor under the guidance of Donato Renzetti.

In September 2005 Michele Mariotti made is operatic debut conducting Rossini’s Il barbiere di Siviglia in Salerno, Italy. In November 2007 he has conducted Simon Boccanegra for the opening of the season 2007/2008 at the Teatro Comunale in Bologna.

Following the success of such production he was nominated Principal Conductor of Bologna’s Orchestra del Teatro Comunale (from 2008 to 2014), where he has to date conducted I puritani, La gazza ladra, Idomeneo, Carmen, Risorgimento and Il prigioniero, La cenerentola, La traviata, Le nozze di Figaro, Norma, Nabucco, Così fan tutte, Guillaume Tell, Un ballo in maschera, Die Zauberflöte, Verdi’s and Mozart’s Requiem and numerous concerts. He has led Bologna’s Chorus and Orchestra in Tokyo (I puritani and Carmen) and recently in Turin for the opening season concert of “Lingotto Musica”.

Michele Mariotti has conducted at La Scala in Milan, at Turin’s Teatro Regio, at Teatro San Carlo in Naples, at Teatro Massimo in Palermo, at Teatro Comunale in Florence, at Pesaro’s Rossini Opera Festival, at Verdi’s Festival in Parma, at the Sferisterio in Macerata, at New York’s Met, at London’s Royal Opera House Covent Garden, at Paris Opéra, at Chicago’s Lyric Opera, at Los Angeles Opera, at Wexford’s Festival (Don Gregorio) and at Wallonie Opera, among others.

Among Michele Mariotti recent and future engagements are: I due Foscari at Milan’s La Scala, Attila at Teatro Comunale di Bologna, La traviata at Paris Opéra, Les Huguenots at Berlin’s Deutsche Oper, concert debut with the Orchestra dell’Accademia del Teatro alla Scala and the Essener Philharmoniker, the return in Naples with the Orchestra of Teatro San Carlo, in Bozen with the Orchestra Haydn and with the Orchestre National de France at the Saint-Denis Festival.

With the Orchestra of Teatro Comunale di Bologna Michele Mariotti has recorded CDs with Juan Diego Florez under Decca and Nino Machaidze under Sony.

Michele Mariotti, born in 1979 in Urbino, near Pesaro, is an Italian conductor, the direttore musicale since 2014 of Teatro Comunale di Bologna. A graduate in composition of Pesaro’s Conservatorio Rossini, where he also studied orchestral conducting, he made his professional opera debut with Il barbiere di Siviglia in Salerno on Oct. 12, 2005. As of April 2017, his repertory included nine Rossini and eight Verdi operas, an extraordinary achievement, as well as symphonies of Beethoven, Bruckner and Schubert, the Rossini Stabat mater, the Mozart Requiem and the Verdi Requiem.

Between 2006 and 2008, following the Rossini opera in Salerno, Michele Mariotti conducted opera in Firenze (Zaninelli’s Snow White in its Italian premiere); in Fano (Gianni Schicchi); at the Wexford Festival (Donizetti’s rare Don Gregorio);  in Bologna; at the Teatro Comunale di Ferrara (L’italiana in Algeri); at the Teatro Regio di Torino; in Lima (Rigoletto with Peruvian tenor Juan Diego Flórez); at the Teatro Principal de Mahón on Menorca (I puritani); at the Teatro Municipale (Valli) in Reggio Emilia (Nabucco for the 2008 Festival Verdi); and in Liège. He also gave concerts with various orchestras in Italy and abroad during this launch period.

The success of a November 2007 filmed run of Simon Boccanegra at the Teatro Comunale di Bologna, opening the season there, led to Mariotti’s appointment as the theater’s direttore principale, to start the next year, a title he would hold until his promotion in 2014. He replaced Daniele Gatti and effectively embarked upon a major career.

Productions in Bologna conducted by Mariotti in his capacities as direttore principale and then direttore musicale have been: I puritani  with Flórez and La gazza ladra in 2009; Idomeneo with Francesco Meli, Carmen and La traviata (2010); La Cenerentola with Laura Polverelli, Ferrero’s Risorgimento! and Dallapiccola’s Il prigioniero (2011); Le nozze di Figaro (2012); Norma with Mariella Devia and Nabucco (2013);

Michele Mariotti duties in Bologna include regular subscription concerts with the Orchestra del Teatro Comunale di Bologna, in its home theater and at the Teatro Auditorium Manzoni, the base of Orchestra Mozart. Beethoven’s symphonies have featured prominently in these concerts.

For thirty years, until early 2017, the opera company in Bologna anchored the Rossini Opera Festival in Pesaro. Accordingly, Michele Mariotti participated in his home town’s most visible summer event. Among his projects for the ROF with the Chorus and Orchestra of the Teatro Comunale di Bologna were three filmed operas: a 2010 Sigismondo,  a 2012 Matilde di Shabran  and a 2013 Guillaume Tell,  the first two featuring his future wife, Olga Peretyatko, the latter two starring Flórez. He also conducted the Bologna forces in the Adriatic resort in Rossini’s Stabat mater.

Michele Mariotti has developed a bond with the Münchner Symphoniker, guest-conducting the German ensemble in 2013, 2015  and 2017  in works by Schubert, Mendelssohn and Bruckner, among others. In the same city, in 2017, he debuted at Bavarian State Opera with Semiramide  starring Joyce DiDonato.

In the United States

Michele Mariotti made his U.S. debut on September 12, 2009, conducting Il barbiere di Siviglia at Washington National Opera.  Two months later he performed the same opera in a different production and with a different cast (including Flórez and DiDonato) at Los Angeles Opera.

In 2012 he led Carmen at the Metropolitan Opera and he has since returned to conduct four other productions with that company,  making DVDs of Rigoletto for Deutsche Grammophon  and La donna del lago for Erato.  He debuted with the Oregon Symphony Orchestra in Portland  the same year (2012) and performed Rossini at Lyric Opera of Chicago two years later.

During the Bologna company’s September 2011 tour to Japan, Michele Mariotti led performances of Carmen, starring Nino Surguladze, and I puritani, with Desirée Rancatore, Celso Albelo, Luca Salsi and Nicola Ulivieri, at Tokyo Bunka Kaikan, as well as events outside the capital.

Michele Mariotti conducted Don Pasquale at the Teatro Regio di Torino in 2009, Il barbiere di Siviglia at the Teatro alla Scala in Milan in 2010, and, for his first performances in Spain, in 2011, L’italiana in Algeri at Bilbao’s Palacio Euskalduna. Elsewhere in Europe, he has led opera at the Teatro di San Carlo in Naples, the Teatro Alighieri in Ravenna, the Teatro Massimo in Palermo, the Teatro Comunale in Florence, the Teatro Verdi in Busseto (Il trovatore in concert in 2011), and at the Sferisterio di Macerata. In 2013 he conducted La donna del lago at the Royal Opera House in London  and I puritani at the Opéra Bastille in Paris.

In the area of symphonic music, he has guest-conducted the Leipzig Gewandhaus Orchestra, the Orchestre National de France, the Orchestra Sinfonica Nazionale della RAI in Turin, and the house orchestra of the Teatro Real in Madrid. He has also led concerts at the Théâtre des Champs-Elysées in Paris and at the Festival de Radio France in Montpellier.

In 2016, Michele Mariotti added I due Foscari to his repertory, conducting it as a return engagement at the Teatro alla Scala.  Later the same year, he led his first performances of two French operas, both featuring Flórez: Les Huguenots at the Deutsche Oper in Berlin  and the above-mentioned Werther in Bologna

Michele Mariotti married Russian soprano Olga Peretyatko in Pesaro in August 2012, just after a run of Rossini’s Matilde di Shabran, o sia Bellezza e Cuor di ferro (Beauty and Ironheart) in which they both participated. She was born in Leningrad in 1980. They live in the Pesaro area, as do Flórez and his wife. The four are close friends; the men were introduced by retired Peruvian tenor Ernesto Palacio, a mentor to Flórez, longtime Pesaro area resident, former artist manager for both the younger tenor and the conductor, and, as of 2018, superintendent of the Rossini Opera Festival.