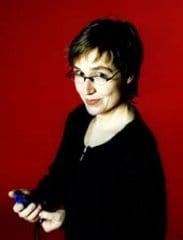 Paula af Malmborg Ward is one of our most distinctive opera composers. It is significant that her diploma work ”The Bomb Party” (premiered in 1998 at the Gothenburg Opera) both had a breakthrough as a composer and, together with the final scene from ”Of Mice and Men” which she wrote before, the decisive step into the opera composing. But versatility as a musician and composer is also attested.

Born in 1962 in Stockholm, she was involved in popular music in various forms during her childhood, in parallel with studies in classical piano for prof. Gunnar Hallhagen She wrote songs, arranged, sang and played piano in several groups, she worked with theatermusic and TV. She trained as a music teacher at the Royal Music Academy in Stockholm, and there also brought a passion for salsa music – then a relatively unknown genre in Sweden. After a couple of years as a musical leader af Skottes Musikteater in Gävle, she returned to school, where she was for 7 years, including studies for Hans Gefors at Malmö Academy of Music.

Paula af Malmborg Ward has a remarkable ease of movement across genre boundaries, and over time this movement has been boiled down to one’s own, unmistakable musical identity, music with a lively temperament and full of ideas. She says: ”The only thing we can be absolutely certain of, and indisputable that we must conduct ourselves to, is that time passes. Therefore – time, and timing, is my first and largest parameter. I am really accurate with that. Once I have set the timing, I can then rummage around in melody, harmony, timbre and rhythm without losing sight of the piece as a whole. ”

This ”security system” makes her able to add f.ex. a touch of tango or bossa in a work if the context demands it. In many of her works the inspiration comes from text or picture, and often the humor has a prominent role, as in her lustful settlement with samba music in the orchestral work ”Sambal Dente”.