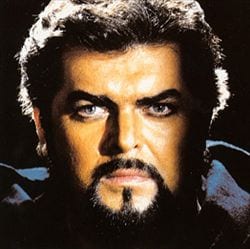 Peter Dvorsky has sung the leading lyric tenor roles in the Italian, French, and Slavic repertoire in houses all over the world, with the occasional foray into spinto roles. His musical talent was apparent at an early age and he began his studies at the Bratislava Conservatory. Immediately upon graduation, he became a member of the Bratislava National Theater and made his opera debut as Lensky in Tchaikovsky’s Eugene Onegin. Two years later, he won the Moscow Tchaikovsky Competition and as part of the prize, joined La Scala’s Scuola di Perfezionamento.

His Vienna State Opera debut was as the Italian Singer in Strauss’ Der Rosenkavalier in 1976. He made his debut at Metropolitan Opera debut as Alfredo in Verdi’s La traviata 1977. His Covent Garden debut was in 1978 as the Duke in Verdi’s Rigoletto.

Born in Partizánske, Czechoslovakia, Dvorský has four brothers, three of whom are also successful opera singers: Jaroslav Dvorský, Miroslav Dvorský and Pavol Dvorský. His other brother, Vendelín Dvorský, is an economist.

Dvorský studied under Ida Černecká at the Bratislava State Conservatory. There he also enjoyed his first successes at the Slovak National Theatre, making his professional opera debut there in 1972 as Lensky in Tchaikovsky’s Eugene Onegin. He won the national singing contest named after Mikuláš Schneider-Trnavský at Trnava in 1973, and in 1974 he won the first prize at the international Tchaikovsky Competition in Moscow. In 1975, he won first place in the singing contest at the Geneva International Music Competition which led to a yearlong apprenticeship under Renata Carosia and Giuseppe Lugga at La Scala in Milan.

In the following years, he quickly achieved international fame. He debuted at the Vienna State Opera, where he was particularly successful and popular, in 1976, at the New York Metropolitan Opera in 1977, and one year later at La Scala, Milan.

Dvorský was highly esteemed by Luciano Pavarotti, who referred to him several times as, ”my legitimate successor”. Although his career has never been that of a superstar, he has become one of the leading tenors of his generation. He has received several distinctions, among others being a national artist and state prize-winner of the former Czechoslovakia. Since 2006, Dvorský has been the head of the opera house in Košice, then of the opera house of the Slovak National theater (SND) in Bratislava.