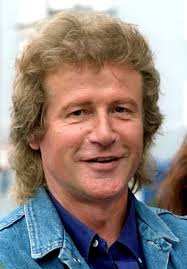 Peter Hofmann could be called a rebel in the positive sense of the word, just like Bayreuth and Richard Wagner.

From his earliest childhood he opposed everything that did not seem sensible to him, be they the views of his parents, teachers, school, music lessons, and most of all, convention, and later he rebelled against the pigeonhole manner of thinking in the music world. He was on the right track with this attitude, as later events would prove.

“Above all, one must believe in himself, even if many times that is a difficult thing to do!”

This faith in himself, in his own abilities, and his pronounced ambition next led him into the realm of sports where he performed at the highest level. When it no longer became a matter of performance, but of other factors which came into play, then he turned his back on competitive sports. And about that same time he discovered his voice. He earned money after school to buy a guitar, learned to play it, jammed with his schoolmates, and soon a successful student band was born.

The influences on their music came from America, from Rock n’ Roll in the form of Elvis and the beat of the Beatles, for which all the youth of that generation were crazy. Rebellion – a new era was dawning – not only in music. He also began to disagree with his parents, and if they forbid something, he simply went ahead and did it anyway. As a guitarist and singer he mastered perfectly Elvis’ hip swinging style, but he soon had to leave the band to perform his military service.

By this time it was clear to him that his future would lie in music. Since he came from a family that not only loved music, but also were connected to the stage, singing alone was not enough for him. He wanted to develop his acting talent as well. He found this combination in opera. From this point on he threw himself into opera, took singing lessons, completed his vocal studies in a very short time, and having begun as a baritone, to his great joy, he managed to develop the voice into a tenor. During his student days he made his first contact with Bayreuth and with his later mentor and friend, Jess Thomas.

“One has always to make the highest demands on oneself!”

With this motto in Lübeck in 1972, he began to lay the foundation for his world career, demonstrating the patience and ambition which took him to Bayreuth and to the most prestigious opera houses of the world.

Even on this journey his rebellious attitude was in evidence. He would not let himself be forced into any predetermined timetable, but rather decided for himself when and where he would undertake which roles, sometimes enduring some extreme conditions.

“I am not always in the mood to listen to Beethoven any more than I always feel like hearing the Rolling Stones.”

Even though opera was his primary love, rock music was always a force. And so, one day he got the idea to make a recording with the classics of rock music. In contrast to the original recordings, he would perform the songs with a classical orchestra, electric guitar, and his big, classically trained voice. And that is how the opera star Peter Hofmann gave birth to the rock star. He was able to bring his creativity to the subsequent tour – an experience which opera did not afford him, and this immediately appealed to him.

Despite what the critics said, singing pop music did not harm his voice because he was consistently able to separate his opera and rock singing. His tour was immediately sold out; the recording went Platinum, and with his success as a “crossover artist,” more than any other artist before him, he was able to create a bridge between “light and serious” music. “Dazzling Peter Hofmann,” “From Hollywood to Bayreuth” read the headlines, but it got better still!

The singer, who had never wanted to sing musicals, after initial reservations, took on the leading role in Phantom of the Opera – a vocal and dramatic role which was very close to opera – and he enjoyed a success beyond his wildest dreams. He also demonstrated his acting skills by playing opposite Richard Burton in the four-part film about Richard Wagner, and because of his love for horses, he played Old Firehand at the Karl May Festival in Bad Segenberg.

Already during the “Country Roads Tour” early in 1995, the first signs of illness manifested themselves, which as they became more visible were eventually diagnosed as Parkinson’s disease and forced him to retire from the stage. Rebellion also means not giving into fate, and in this sense he fought on the front lines by founding the “Peter Hofmann Parkinson Research Project” to combat the disease.

To remember his magnificent career which had come to an abrupt end, several citizens of Kemnath created a “Memorial Room” in the region where he had lived for decades. This room was opened on his 63rd birthday, August 22, 1007, in the State Library of Kemnath and remains a tribute there to this day.

In 2010 his brother and long-time manager, Fritz Hofmann, published a book about his brother, Peter Hofmann: Tales of a Singer’s Adventures, in which he told in an entertaining fashion twenty-six anecdotes about adventures that the two brothers had shared in their travels around the world.