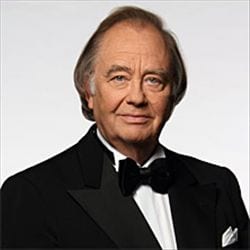 René Kollo was born René Kollodzieyski in Berlin and grew up in Wyk auf Föhr. He attended a photography school in Hamburg, although he had always been interested in music, particularly conducting. He did not begin to perform (as a self-taught drummer) until the mid-50s. He played in jazz clubs and studied acting with Else Bongers in Berlin. To prepare for musical roles, he studied with Elsa Varena, who quickly recognized that he had an unusual gift.

René Kollo signed his first recording contract at 20 and recorded popular hits. He made his operatic debut in Braunschweig in 1965 in three Stravinsky one-act operas: Mavra, Renard, and Œdipus Rex. He stayed in Braunschweig for two years, singing most of the lyric tenor repertoire. In 1967, he went to the Deutsche Oper am Rhein in Düsseldorf, still singing lyric roles.

In the same year, he married pop singer Dorthe Larsen and became the father of a daughter, Nathalie.

He was guest soloist in Munich, Frankfurt, Milan, and Lisbon. He began his now legendary association with Wagner and his Heldentenor roles at Bayreuth in 1969, where he sang the Helmsman in The Flying Dutchman. The major Wagnerian roles followed in quick succession: Erik in 1970, Lohengrin in 1971, Walter in 1973, Parsifal in 1975, Siegfried in 1976, Tristan and Tannhäuser in 1981. He has since sung these roles at major opera houses throughout the world, including the Metropolitan Opera, where he was seen in Lohengrin (1976, conducted by James Levine) and Ariadne auf Naxos (1979).

He has also directed Parsifal in Darmstadt in 1986 and Tiefland by Eugen d’Albert in Ulm in 1991.

He also has sung non-Wagnerian roles, including Hermann in Tchaikovsky’s The Queen of Spades, Florestan in Fidelio, Britten’s Peter Grimes, and Verdi’s Otello. In fact, he has an unusually wide repertoire for aHeldentenor. Other tenor roles he sang were that of Count Danilo, in Herbert von Karajan’s 1972-1973 recording of Franz Lehár’s operetta The Merry Widow, with Elizabeth Harwood and Teresa Stratas, and Prince Edwin in the 1971 film of Emmerich Kalman’s operetta Die Csardasfuerstin with Anna Moffo and Dagmar Koller..

He has not confined himself to grand opera, but made many television appearances, singing lighter repertoire, including an operetta he composed himself.

He has been married since 1982 to Beatrice Bouquet (a dancer) and they have three children, Florence, Magali, and Oliver Walter.

On video, two performances of his Tristan can be found: a 1983 production staged at the Bayreuth Festival by Jean-Pierre Ponnelle (with Johanna Meier as Isolde) and a 1993 production from Berlin, directed by Götz Friedrich (with Dame Gwyneth Jones as the Irish princess). He has also composed and written text for numerous songs, following in the steps of both his father and his grandfather, who were operetta composers.