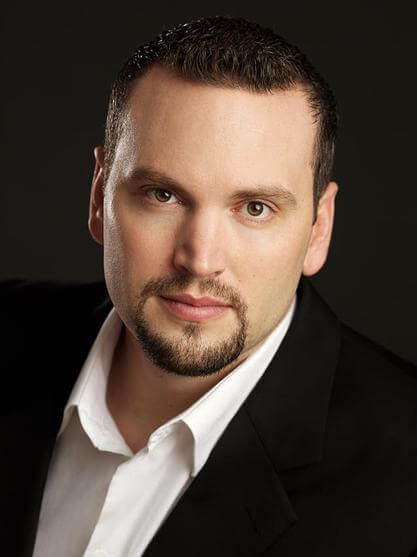 Scott Quinn,lauded by the Dallas News for a ”clarion” voice, tenor Scott Quinn fills his 2014-15 season with role debuts. He joins the Lyric Opera of Kansas City for Alfredo in La traviata and Atlanta Opera for Duca in Rigoletto. He returns to Houston Grand Opera as Pirelli in Sweeney Todd and Tamino in outdoor performances Die Zauberflöte as well as Dallas Opera for Narraboth in Salome. Last summer, he debuted the roles of Ferrando in Così fan tutte with Fort Worth Opera and Pinkerton in Madama Butterfly with Chautauqua Opera after completing his final year as a member of the Houston Grand Opera Studio, where he sang performances of Alfred in Die Fledermaus, Mr. Erlanson in A Little Night Music, and Borsa in Rigoletto.

In previous seasons with Houston Grand Opera, sang Rodolfo in La bohème, the Sailor in Tristan und Isolde, Ruiz in Il trovatore, Royal Herald inDon Carlos, and Gastone in La traviata. He is also a former Artist in Residence of Dallas Opera where his performances included Tybalt in Roméo et Juliette, Roderigo in Otello, Lord Cecil in Roberto Devereaux, Normanno in Lucia di Lammermoor, and the cover of Greenhorn in the world premiere run of Heggie’s Moby Dick.

He joined Shreveport Opera for Anthony Hope in Sweeney Todd and The Living Opera (Richardson, Texas) for Martin in The Tender Land and Fredric in Pirates of Penzance. He has also sung previous performances of Rodolfo in La bohème at the Northern Lights Music Festival.

Mr. Quinn is a former participant in San Francisco Opera’s prestigious Merola Opera Program in which he sang excerpts of the title role of Don Carlosin the Schwabacher Summer Concert as well as Nadir in the well-loved duet from Les pêcheurs de perles.

He has won first place in the Shreveport Opera Singer of the Year Competition, second place in the Dallas Opera Guild Competition and has also placed in the competitions of both Florida Grand Opera and Palm Beach Opera. He holds a Bachelor of Music degree from Stephen F. Austin State University