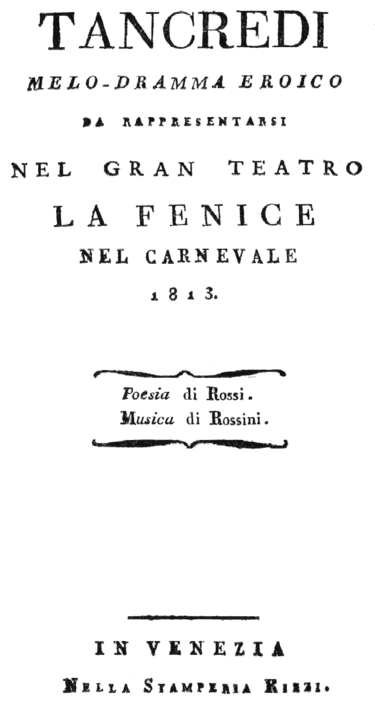 There is both conflict and war between the Byzantine empire (with which it has an unstable truce) and the Saracen armies headed by Solamir, but exhausted by external war, there are internal conflicts as well. The soldier Tancredi and his family have been stripped of their estates and inheritances, and he himself has been banished since his youth.

Two noble families, headed by Argirio and Orbazzano, have been warring for years and they begin to reconcile. Also present is Solamir, the Moorish general. Argirio’s daughter, Amenaide, is secretly in love with Tancredi. Prior to the beginning of the opera, she has sent him a letter (without naming him in it), and it is this letter which complicates the proceedings which follow.

Scene 1: A gallery in Argirio’s palace

Warring nobles Argirio, leader of the Senate in Syracuse, and Orbazzano and their men celebrate a truce and the end of a civil war: Chorus: Pace, onore, fede, amore / “Peace, honour, faith, love / Rule now”. Along with Isaura and her ladies, Argirio proclaims that this unity reinforces a new security for the city against the Moorish forces led by Solamir: Se amistà verace, é pura / “If you keep in your heart true friendship”. He names Orbazzano as the leader against the Moors. However, Argirio warns the assembled forces against a possible greater threat, that from the banished Tancredi, a statement which disturbs Isaura. Argirio then summons his daughter, Amenaide to appear.

She joins in the general songs of triumph which are expressed by the assembly, but is also disturbed by the fact that her secret beloved, Tancredi, has not rejoined her in spite of the fact that she has written a letter to him asking him to do so now that he is returning in disguise to Syracuse. The Senate, having already given Tancredi and his family’s confiscated estates to Orbazzano, Argirio then offers Amenaide in marriage to him in order to help solidify the truce.

He wishes to have the ceremony performed immediately, and although she dutifully consents to the arrangement, she pleads with her father to postpone it until the following day. All leave except Isaura who laments upon the situation in which Amenaide is now placed: Amenaide sventturata! / “Unhappy Amenaide, what a dreadful day for you”.

Scene 2: A garden in the Palace

The garden is close to the seashore. Roggiero, then Tancredi and his men, disembark from a ship. Not having received Amenaide’s letter, he pledges to help defend the city against the invaders and to seek out his beloved: Aria: Oh patria! dolce, e ingrate patria / O my country, dear, thankless native land”. Roggiero is dispatched with a message for Amenaide, and he sends his followers to spread the word that an unknown knight has arrived to help save the city. His thoughts turn to Amenaide: Tu che accendi questo core / “You who set aflame this heart”, and then to how much pain he has caused her: Di tanti palpiti, di tante pene / “After such beating of the heart, such torment”.

When all have left, Tancredi sees Argirio and his daughter enter the garden. He hides, but can overhear their conversation. Argirio informs Amenaide and the followers who accompany them that all are invited to the wedding which will take place at noon. The young woman pleads for more time, but is told that the ceremony must take place right away.

Argirio continues by informing all that the enemy leader, Solamir, has surrounded the city, and has asked for Amenaide’s hand in marriage. Orbazzano then states that he will lead the people of Syracuse against the enemy, the recent action of the Senate having condemned to death all traitors. Argirio’s aria: Della patria ogni neminco danna a morte il Senato / “The Senate has condemned to death any enemy of the country”.

As Argirio leaves, Amenaide immediately regrets that she has indirectly involved Tancredi by writing to him: Che feci! incaula! / “What have I done! Thoughtless woman!”. Tancredi then appears and Amenaide tells him that he must immediately escape. Coldly, she rejects his claims of loving her, although the couple, in spite of their differences, then laments the dangerous situation in which they find themselves: Duet: L’aura che interno spiri / “The air you breathe brings mortal danger”.

[This duet, being the first confrontation between the couple, was omitted after the Venice premiere and replaced with L’asciami: non t’escolto from act 2, scene 3. However, it reappears in some modern recordings (and productions) which use the Ferrara ending and some of which therefore omit L’asciami. Others retain it.]

Scene 3: A public square close to the cathedral

People are gathered in the square for the wedding ceremony. Argirio assures all that the new-found unity between the two factions will be strengthened by the marriage. In disguise, Tancredi appears and offers his services. Privately, he feels that Amenaide has betrayed him by accepting the marriage but, when she refuses to go ahead with it, an angry Orbazzano enters. Publicly, he denounces her and, having overheard the prior conversation, declares that the marriage will not take place.

Immediately, he produces a letter, which he assumes was intended for Solamir and which appears to implicate her in a treasonous plot to overthrow Syracuse by calling upon the recipient to come and capture the city. [In reality it is the letter which Amedaide had sent to Tancredi, deliberately omitted his name for his protection, and which had never reached him].

The assembled crowd is horrified: “Die in disgrace, woman!” they proclaim. Amenaide swears that she is innocent, but her father denounces her, as does Tancredi. She is dragged off to prison to await death as all except her faithful Isaura proclaim: Quale infausto orrendo giorno! / “A day of disaster, what an ill-starred day…a day of disasters and terrors.”

Scene 1: A gallery in Argirio’s castle

An angry Orbazzano reflects on Amenaide’s apparent treachery and her contempt of him: Vedesti? L’indegna! / “You have seen? She spurns me, the unworthy woman”. Aside, Isaura pities Amenaide’s fate, reminding Argirio that Amenaide is his own daughter: E tua figlia! / “She is your own daughter”. The assembled knights are divided in their emotions, and while Argirio expresses his sorrow at the turn of events, (Aria: Oh Dio! Crudel! qual nome caro e fetal oe mi rammenti / “You remind me of that name both dear and fatal”), he reluctantly signs the death warrant, with some of the group of knights pleading for mercy, others supporting his decision.

All but Isaura and Orbazzano leave. She reproaches him for his cruelty and barbarous behaviour, and, then alone after he leaves, she pleads for divine aid for Amenaide: Aria: Tu che I miseri conforti / “You who console the miserable, give her endurance”.

Scene 2: Inside the prison

In chains, Amenaide enters: Aria: Di mia vita infelice / “Here I am at the end of my unhappy life”. She cries out to Tancredi “I die for you!”: Aria: No, che il morir non è / “No, death is not so terrible to me if I die for love”. In the end, she believes that he will learn the truth and “he will know the constancy of my heart”.

Into the prison come Orbazzano and his followers, determined to see the execution carried out. But he asks if there is anyone willing to defend the traitor. Tancredi, although he still believes that his love has been betrayed and that Amenaide is a traitor, steps forward. He challenges Orbazzano to a duel in defense of Amenaide’s honor and life, and throws down his gauntlet before his adversary. Throughout the men’s interchange, Amenaide urges Tancredi to prove that she is innocent.

Orbazzano embraces the unknown knight, seeking to know his identity as does Argirio who, in a duet with Tancredi, pleads: Ah! se de’mali mieri / “Ah! If you have pity in your heart for my sufferings, At least reveal to me who you are. Comfort me in my pain”. In return, Tancredi declares “Heaven has been my enemy since my childhood. You will know who I am one day, But do not hate me…” and the trumpet sounds, signaling the start of the contest. About to rush off, he proclaims “To the field; I burn with glory and with fury”.

In another part of the prison, Amenaide learns what has transpired: she prays for protection for Tancredi, begging him to return to her a victor: Aria: Gran Dio! Deh! tu proteggi / “Just God whom I humbly adore, You can read in my heart, You know whether I am guilty, And for whom I ask your favour”. From outside, a roar announces Tancredi’s victory, while she declares: “In this moment I see it, I feel it.”

Scene 3: The main square of the town

Tancredi arrives triumphant and the people rejoice. However, as sweet as victory may be, he resolves to leave Sicily and, as Amenaide approaches him, he still believes that she has been unfaithful and is unwilling to talk to her. In a duet, they express their conflicting emotions: Duet: L’asciami: non t’escolto / “Let me go; I will not listen to you”. She then demands that he kill her, but both leave while Roggiero remains, having learned the truth from Isaura: S’avverassero pure I detti suoi! / “If only her words were true”. But he expresses the hope that, if Amenaide is indeed innocent, then “May the torch of love return shining, smiling and fair”.

Scene 4: A cavern in a mountain range with Mt. Etna in the distance

Alone and close to the Saracens’ camp, Tancredi reflects upon his sad destiny: Aria: Dove sono io? / “Where am I? Through what horrors does my despair lead me?”, all the while recalling Amenaide’s betrayal: “Oh that I could forget!” The Saracens appear proclaiming Regna il terror nella Citta / “Terror reigns in the city”. With the arrival of the knights of Syracuse along with Argirio and Amenaide, who come in search of him, Amenaide is told that peace will follow if she agrees to marry Solamir.

Tancredi defies the Saracens, expressing willingness to fight to the death: Rondo: Perchè turbar la calma / “Why trouble the peace of my heart”. Urged to go into battle and, when all is over, Tancredi emerges victorious and learns that the dying Solamir has testified to Amenaide’s innocence.

In a moment of general rejoicing, the lovers are reunited: Fra quai soave palpiti / “Gently beats my heart”. Tancredi, Agirio and Amenaide are united in expressing their joy: Si grande è il mio contento / “So great is my joy”, and Isaura joins them in the general rejoicing.

[Ferrara ending as written: one month after the original production, Rossini revised the ending (along with other changes) so that Tancredi wins the battle but is mortally wounded, and only then does he learn that Amenaide never betrayed him. As all clasp hands, Argirio marries the lovers in time for Tancredi to die in his wife’s arms.]