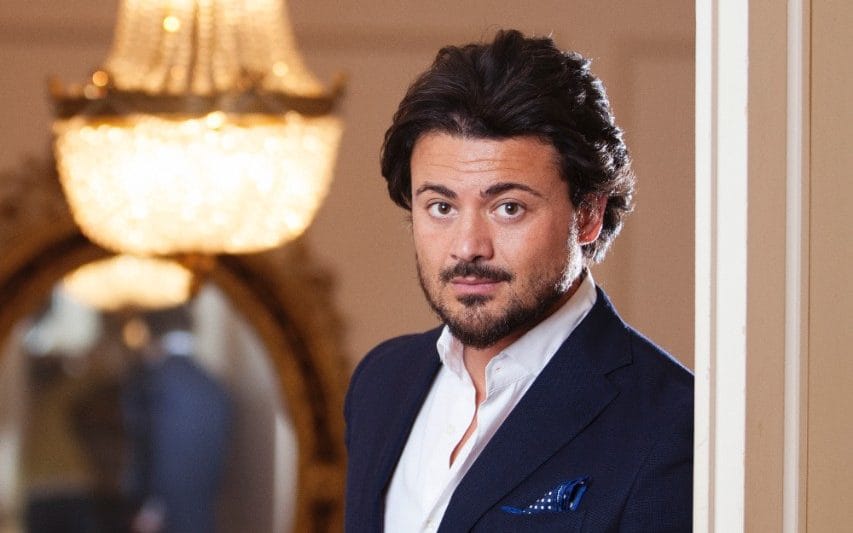 Italian tenor Vittorio Grigolo made his Royal Opera debut in 2010 as Des Grieux (Manon). He has since returned to sing the title role in Faust, Alfredo Germont (La traviata). The Duke of Mantua (Rigoletto), Rodolfo (La bohème) and Nemorino (L’elisir d’amore) for The Royal Opera.

Vittorio Grigolo was born in Arezzo and raised in Rome, where he sang as a soloist with the Sistine Chapel Choir. He made his operatic debut as the Shepherd Boy (Tosca) for Rome Opera and went on to study with Danilo Rigosa. At the age of 23 he became the youngest tenor to perform at La Scala, Milan. Since then he has sung at many of the world’s leading opera houses, in repertory including Hoffmann (Les Contes d’Hoffmann), Werther, Edgardo (Lucia di Lammermoor) and Roméo.

Grigolo is a recording artist for Sony, with whom he has made several award-winning solo albums. He has also appeared as Alfredo in a televised broadcast of La traviata from Zürich’s main railway station. And as the Duke of Mantua in a worldwide live television broadcast of Rigoletto from Mantua. Opposite Plácido Domingo in the title role.
Italy announces a formidable return to the opera stage with the young Italian tenor, Vittorio Grigòlo. His exceptional vocal and dramatic talents have been widely praised by the world’s press. Vittorio’s 2010 debut at London’s Royal Opera House Covent Garden as Des Grieux in Manon. Was described

as” the most sensational debut to be heard at Covent Garden for some time. He’s got everything the role demands – a voice that flows, terrific looks, an instinctive sense of theatre”. The Guardian

Born in Arezzo, Tuscany and raised in Rome, Vittorio was only four when he discovered his passion for music; a few years later he was made a soloist in the Sistine Chapel choir. Having made his debut as the Shepherd in Tosca at the age of thirteen. He began his vocal training in earnest, and at twenty-three became the youngest tenor ever to perform at La Scala, Milan. Within a few years, he was appearing around the world under the batons of Riccardo Chailly, Lorin Maazel, Zubin Mehta. Riccardo Muti, Myung-Whun Chung, Gustavo Dudamel and Antonio Pappano.
Current season
Events in the current season include his debut at the Paris Opera in Lucia di Lammermoor in Fall 2013. Performances at La Scala, Milan, La Boheme in Vienna and New York and the release of his new album “Ave Maria” on Sony Classical. Drawing inspiration from his childhood singing in the legendary Sistine Chapel Choir in the Vatican. Vittorio now brings together an intimate collection of uplifting and beautiful spiritual songs, together with the very choir that shaped his musical beginnings.

He has a repertoire that includes some 24 operas from amongst others, Mozart, Donizetti, Verdi, Puccini, Gounod, Massenet, Offenbach, Bernstein and the sacred works of Rossini. As one of the leading tenors of his generation, he now performs in the world’s most prestigious opera houses including La Scala, Milan, The Royal Opera House, London, The Metropolitan Opera, New York, Washington National Opera, Deutsche Oper, Berlin, Opernhaus Zurich, Palau de Les Arts Valencia, and Chorégies D’Orange to name just a few.

He brings the same energy to his live concert performances as he does to his operatic roles. In 2008 he was invited to sing before an audience of over 40,000 at an event organized in Chicago as a tribute to the late Luciano Pavarotti. In 2010 Vittorio collaborated with Zubin Mehta and the Israel Philharmonic Orchestra in a special gala concert performance of Rigoletto in Tel Aviv and at the beginning of 2011 and 2012 he gave a tour of concerts in Germany and Switzerland performing arias and songs from his albums.
With a gold and platinum-selling debut album, a Grammy-nominated recording of Bernstein’s West Side Story and his album “The Italian Tenor” (Sony Classical) reaching the number one position in the US Billboard Classical Album chart, Vittorio is already established as a successful recording artist. In 2011 Sony Classical also released “Arrivederci” his personal selection of the most beloved Italian songs and opera arias ever written for the tenor voice.

In addition, Vittorio has successfully moved across into television media with both his 2008 performance of Alfredo in La Traviata, broadcast live from Zurich’s main train station and Andrea Andermann’s 2010 highly acclaimed, worldwide live broadcast of Rigoletto from Mantua where Vittorio performed the leading tenor role of The Duke of Mantua alongside Plácido Domingo’s portrayal of Rigoletto.

Vittorio has been honored with awards that include the “European Border Breakers award” for his first solo album “In the Hands of love” (Polydor) and France’s 2010 Diapason” Decouverte de L’Année” (Discovery of the Year) award in recognition of his album “The Italian Tenor”. Also, “Best Tenor “category in L’Opera Magazine’s 2011 Opera awards, for his performance as “Des Grieux” in Manon at London’s Royal Opera House (2010) and the prestigious ECHO Klassik Newcomer of the year award in 2011.