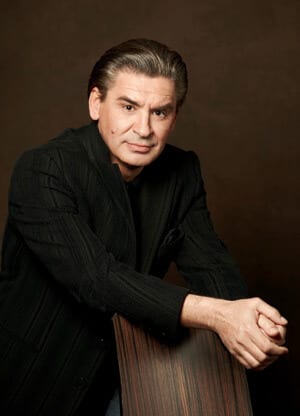 Zoran Todorovic broad repertoire includes most of the key roles for a dramatic tenor and in 2009 he scored a particularly great success with his assumption of his first Wagnerian role, the title role in Lohengrin which he performed at the Teatro Massimo in Palermo.

Zoran Todorovich began the 2010/2011 season with his first Andrea Chenier at L’Opera de Marseille. He returned to the Teatro Massimo in Palermo as Dick Johnson in La Fanciulla del West, after which he sang his first performances of Jean in Massenet’s Herodiade for the Flemish Opera in Ghent and Antwerp. Todorovich returns to the Bavarian State Opera in Munich as Pollione in Norma opposite Edita Gruberova and will also partner Ms Grubeerova in Roberto Devereux in concert in Warsaw.

He will also be heard as Ismaele in concert performances of Nabucco in Brussels and as Pinkerton in Tokyo. In September of 2011,Todorovich will return to the Opera de Geneve, where he scored a great personal success as Manrico in Il Trovatore in 2009, in a new staging of Andrea Chenier.

He then made his debut at the Opera Bastille in Paris as Don Alvaro in La Forza del Destino. Future projects also include his debut at the Gran Teatro del Liceo in Barcelona in the same role ,and both La Fanciulla del West and Francesca da Rimini for L’Opera de Monte Carlo. Todorovich also sings Turridu in Cavalleria Rusticana and Canio in Pagliacci at the Zurich Opera .In 2013 he will add a new Wagnerian and a new Verdian role to his repertoire; appearing as Radames in Aida in Marseille and as Parsifal for the Flemish Opera.

Zoran Todorovich began his musical and vocal studies in his native Belgrade and then completed them at the Hochschule fuer Music in Frankfurt. He started his professional career at the Landetheater Detmold after which he was invited by Professor Hans Peter Lehmann to join the ensemble of the Hannover Opera where he developed his lyric tenor repertoire.

Zoran Todorovich first came to international attention when he made his international debut at the Teatro de la Maestranza in Seville as the Duke in Rigoletto opposite Leo Nucci. Important European debuts followed in rapid succession. He sang the title role of a new production of La Clemenza di Tito at the Teatro Real in Madrid, debuted at the Vienna State Opera, Deutsche Oper Berlin, Staatsoper Berlin as Pinkerton in Madama Butterfly, as Alfredo in La Traviata at the Hamburg State and as Lensky in Tchaikovsky’s Eugene Onegin at the Theatre Royale de la Monnaie in Brussels, the Frankfurt Opera, L’Opera de Nice and in Tokyo.

He also sang the title role in Zurich’s new staging of Berlioz’s La Damnation de Faust. Todorovich returned to all these theaters regularly for various projects. Particular highlights included his appearance as Leopold in the revival of Halevy’s La Juive at the Vienna State Opera and a new production of. Roberto Devereux in Munich, as well as in concert performances of the work in Cologne, Dortmund and Duisburg; all opposite legendary Bel Canto diva Edita Gruberova .Todorovich made his North American debut at the San Francisco as Rodolfo in La Boheme and returned shortly thereafter as Pinkerton .

Todorovich’s transition into the lirico spinto literature began with his debut as Cavaradossi in Tosca in Austin in 2004 opposite Carol Vaness. He was then invited to sing concert perfomances of Tosca with the Israeli Philharmonic under Zubin Mehta, followed by performances at the Berlin State Opera. In 2005 Todorovich sang his first Manrico in Il Trovatore in Thessaloniki, Greece, while in 2006 he sang Pollione in the Bavarian State Opera’s new production of Bellini’s Norma opposite Edita Gruberova to enormous critical acclaim. This role has played a key part of Todorovich’s vocal evolution. He has since been heard as Pollione at the San Francisco Opera, Berlin State Opera, L’Opera de Marseille, SemperOper in Dresden, and in Antwerp, Duesseldorf and Warsaw.

In 2006 Todorovich made his debut with the Netherlands Opera in his first performances of Turridu in Cavalleria Rusticana . He added Don Jose in Carmen to his repertoire in Montpellier, later appearing in the role in Dresden and Toulouse. Todorovich sang his first Don Carlos in Dresden in the spring of 2007. The same year he also made his debut at the Royal Opera House, Covent Garden in Il Trovatore. .

In the summer of 2007 Todorovich starred in the Bregenz Festival’s new production of Tosca. He subsequently returned to the SemperOper Carmen Don Carlos. Todorovich further expanded his repertoire in the 2007/2008 season; appearing as Don Alvaro in La Forza del Destino at the Theatre de La Monnaie in Brussels and as Jason in a new production of Cherubini’s Medee at the Theater an der Wien. He also appeared in Tokyo in Carmen, in Munich in Norma and Tosca and in Tel Aviv in Madama Butterfly.

During the 2008/9 season Todorovich continued to add roles to his repertoire; first as Calaf in Turandot for the Flemish Opera and then in the title role of Lohengrin for the Teatro Massimo in Palermo. He made his debut at the Royal Danish Opera in Don Carlos and also returned to Toulouse for Carmen and to Geneva as Manrico in Il Trovatore. In the summer of 2009 Todorovich returned to Palermo as Turridu and then appeared with the company in this role at the Savonlinna Festival. He made his debut at the Macerata Festival in the summer of 2010 as Don Alvaro.

Todorovich has also been frequently heard in concerts all over Europe in venues such as Die Alte Oper in Frankfurt and the Philharmonic Halls in Cologne (an Opera Gala with Vesselina Kasarova), in Berlin (Rachmaninov‘s Die Glocke), in Munich (Verdi Requiem with Julia Varady and Roberto Scandiuzzi), in Cologne (an Operetta Gala with Marcel Pravy). Zoran has sung with the Bamberg Symphony under Marcello Viotti (Rossini Stabat Mater), with Hesse Radio (the German premier of Gounod‘s Mors e Vita under Viotti) and under Christof Eschenbach in a series of Verdi Requiem concerts in Hamburg, Lübeck, Barcelona and Madrid. In December 2006 he appeared in all major Swiss cities as soloist in Opera Galas. In 2009 he sang the Verdi Requiem under Fabio Luisi in Dresden.