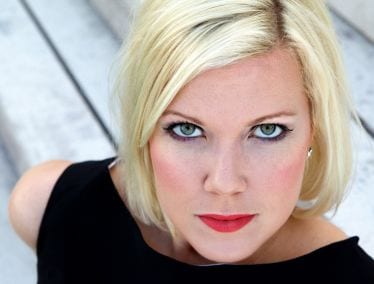 Norwegian Christel Elisabeth Smith studied at the Royal Opera Academy in Copenhagen where she graduated in June 2009, and has already made her mark as a soloist of both operatic and concert repertoire.
In February 2009 she made her official operatic debut at the Royal Danish Opera in Copenhagen in the role of Valencienne in Lehár’s The Merry Widow. Her projects in her native country of Norway has included Micaëla in Bizet’s Carmen and Lauretta in Puccini’s Gianni Schicchi, as well as Hilde in Ragnar Søderlind’s opera The Lady from the Sea and Lady in Waiting in Verdi’s Macbeth, both at the Norwegian National Opera.
She is focusing her talent on lyric repertoire ranging from  Mozart’s Fiordiligi and Contessa to Tatyana in Tchaikowsky’s Eugene Onegin and Eva in Wagner’s Die Meistersinger aus Nürnberg.

In 2011 she sang Tatyana in Eugen Onegin in concert alongside baritone Audun Iversen and with the Copenhagen Philharmonic Orchestra conducted by Alexander Polianichko at the Tivoli Festival in Copenhagen, where she immediately was invited to return the following summer to sing the leading part of Leïla in Bizet’s Les pêcheurs de perles with tenor Lawrence Brownlee as Nadir, conducted by Yves Abel.
In 2010 she was chosen as one of only 40 participants – out of nearly 1000 applicants – in Placido Domingo’s Opera Competition in Milan, and in 2011 she was a semi-finalist in the Belvedere Competition in Vienna.
She has received numerous awards and prizes as recognition for her outstanding and unusual talent, and now lives in Florence, from where she continues both her international career as well as her continued studies with renowned coaches and voice teachers.