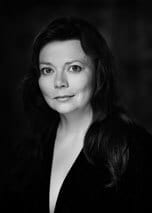 Djina Mai-Mai (soprano) made her debut in 1986 as Barbarina in The Marriage of Figaro, and the next year sang the Queen of the Night in The Magic Flute. Since then she has sung innumerable roles, among which can be mentioned Olympia in Tales of Hoffmann, Musette in La Bohème, Norina in Don Pasquale, Sophie in Der Rosenkavalier, the Princess in The Love for Three Oranges and Zerbinetta in Ariane auf Naxos. In the 1995/96 season she added the role of Ophelia in Ambroise Thomas’ Hamlet to her extensive repertoire.

She has performed with the Danish Radio Sinfonietta in a ”historical” concert at the Royal Danish Opera in the bel canto repertoire. In the summer of 1996 she appeared as a soloist with the Nice Philharmonic Orchestra under the conductor Klaus Weise, and the same year she performed in the Cultural Capital 1996 event The Three Sopranos with the Odense Symphony Orchestra. Djina Mai-Mai has also sung the title roles in the Danish Broadcasting Corporation’s TV productions of Jánacek’s The Cunning Little Vixen and Stravinsky’s The Nightingale. She has been a soloist with all Danish regional orchestras in performances of masses and oratorios.