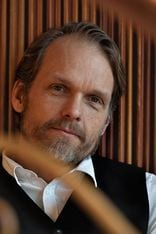 Johannes Mannov was born in Copenhagen, Denmark but he had his vocal training at the Music academies in Freiburg and Karlsruhe, Germany.

His operatic debut was with the opera house in Kassel Germany, and he has since performed around the world: New Zealand, Australia, South America, USA, Israel, Turkey, and throughout Europe.

With his vast lied- and oratorio-repertoire, he has been invited to the main musical centres of Europe including The Amsterdam Concertgebouw, Berliner Philharmonie, London Barbican Centre, Tonhalle Zürich, Palao Musicao Barcelona, Paris Theatre de Camps Ellysiée and Cité de la Music, and to many Festivals around the world such as Perth, Edinborough, Luzern, Istanbul, Schleswig Holstein, Innsbruck, Brussels, Milano, Madrid and Venice.

Johannes Mannov works frequently with musicians performing on historical instruments. He has collaborated with Musica Antiqua Cölln, Das Freiburger Barockorchester, R.I.A.S. Berlin, Akademie für Alte Musik Berlin, La Petite Bande, The Festetics Quartet, La Chapelle Royale and the Balthasar Neumann Chorus and -Ensemble. The fruits of much of this work has been recorded and is availiable on CD.

Johannes performed Orestes to great critical acclaim in Konwitchny´s ELEKTRA at the Royal Opera in Kopenhagen. He returned there to sing in Golaud in Guy Joosten’s celebrated production of PELLEAS ET MELISANDE.

In addition to his flourishing solo career Johannes Mannov is appointed professor at Hochschule für Musik in Nürnberg, Germany beginning the autumn of 2012.