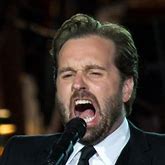 Alfred Boe is best known for his performances as Jean Valjean in the musical Les Misérables at the Queen’s Theatre in London, the 25th Anniversary Concert, the 2014 Broadway revival and the All-Star Staged Concert. He played the lead role in Finding Neverland on Broadway beginning 29 March 2016.  As well, Boe shared a Tony Award with the other members of the ensemble cast of Baz Luhrmann’s 2002 revival of La bohème in 2003.  He has sold more than one million albums in the United Kingdom.

Boe, the youngest in a family of nine children,  was born in Blackpool, Lancashire, and brought up in nearby Fleetwood. He is of Irish and Norwegian descent. His mot her and father named him after the Italian name of Pope John XXIII.  He attended St Wulstan’s and St Edmund’s School  and Cardinal Allen Catholic High School in Fleetwood. His earliest musical memories were of listening to his father’s Richard Tauber records and he discovered Puccini’s La bohème for the first time.

Alfred Boe’s first public performance, aged 14, was at Fleetwood’s Marine Hall in a ”Songs from the Shows” presentation organised by inspirational local singing teacher Lottie Dawson. He said that although he sang only a couple of lines he was extremely nervous.

At the age of 17, Boe became an apprentice mechanic at the  TVR factory in Bispham, Blackpool.  He enjoyed entertaining his colleagues by singing opera arias while he polished the cars, and one day was overheard by a client with connections in the music industry who was so impressed that he suggested Boe should go to London and audition for the D’Oyly Carte Opera Company. His audition was a success and he gave up polishing cars to embark on a singing career. Boe has not been able to trace the customer who suggested he go for the audition, having lost the man’s business card.

Boe moved to London and studied singing at the Royal College of Music, the National Opera Studio and the Royal Opera House’s Vilar Young Artists Programme. In 1999 and 2000, he was featured as the ”opera dude” on albums by the Clint Boon Experience, led by the former organist of the Inspiral Carpets. In 1999 he sang Ernesto for Scottish Opera in their Opera-Go-Round production of Don Pasquale, touring widely throughout Scotland.

Baz Luhrmann, who had spent two years looking for the lead for his Broadway production of La bohème, approached Boe for the role.   Boe subsequently appeared (credited as Alfred Boe) on the 2002 Broadway Cast Recording released by Bazmark Live. Boe and the other principal leads received the Tony Honors for Excellence in Theatre in 2003. He has also sung the role at Glyndebourne and the English National Opera.

In 2006, Alfred Boe was signed to the Classic FM Presents label as their first signing in a new venture for the radio station, and his album Classic FM Presents Alfie Boe  reached number three in the UK classical chart.  At the 2006 Canterbury Festival, on 27 October, Boe performed with soprano Hayley Westenra at a concert in Canterbury Cathedral. In November 2006 he was signed to the EMI Classics label   and his first album on that label, Onward, was released in March 2007.

Alfred Boe toured the United Kingdom with the Fron Male Voice Choir in February 2007 and took part in the first Classic FM webcast concert with soprano Natasha Marsh in March. The same month, he was appointed as an ambassador of the Prince of Wales Arts & Kids Foundation, a British educational charity working to inspire and educate children by introducing them to the arts. Boe’s role being to bring music, and opera in particular for those children involved.

In April, Alfred Boe starred opposite Lesley Garrett and Willard White in the ITV Music of Morse concert at the Royal Albert Hall.  He was also nominated for a Classical BRIT for Best Album,  missing out to Paul McCartney at the ceremony on 3 May 2007.

Alfred Boe performed with Michael Ball in the English National Opera production of Kismet. His live performance of the song ”Stranger in Paradise” from Kismet on the Michael Parkinson show was released as a download single on 25 June 2007. In August, Boe realised an ambition to record an album of Neapolitan songs which was released in November under the title La Passione.  On 24 August 2007 he performed at the Arundel Festival alongside Natasha Marsh.

On 31 January 2008, Alfred Boe performed at the Pleasure Beach Arena, Blackpool to more than 1,600 local children in a special Music Quest concert to introduce the classics to a new generation. The concert celebrated the end of the Music Quest three-year project, which was sponsored by the Prince of Wales Arts & Kids Foundation and Classic FM MusicMakers.

On 3 October 2010, Boe took the role of Jean Valjean in a concert performance of the musical Les Misérables at the O2 Arena in London to celebrate the 25th anniversary of the show, released on DVD and Blu-ray Disc. The concert encore performance of ”Bring Him Home”, credited as the ”Valjean Quartet” – Boe with Colm Wilkinson, John Owen-Jones and Simon Bowman, each of whom has portrayed Valjean in various theatrical productions, was re-recorded at the Abbey Road Studios and released as a charity CD single and download on 13 December 2010.

On 16 December 2010, Boe once again performed as Valjean in the Royal Variety Performance in front of Prince Charles and the Duchess of Cornwall singing ”What Have I Done?”, and ”Bring Him Home” again alongside Wilkinson, Owen-Jones and Bowman.

Alfred Boe appeared as Valjean in Les Misérables at the Queen’s Theatre in London from 23 June to 26 November 2011.  His friend Matt Lucas also joined the cast as Thenardier. During his run as Valjean, Boe appeared in the ”Les Misérables v Lend Me a Tenor Battle of the Tenors” at Soho’s Winnett Street in London on 13 July 2011. In August, Boe performed with the National Symphony Orchestra at Beau Sejour and Gloucester Hall.

In 2015, he reprised the role of Valjean in the Broadway revival of Les Misérables at the Imperial Theatre in New York City. He succeeded Ramin Karimloo, who played Enjolras in the 25th Anniversary concert, on 1 September 2015.

In February 2019, Boe announced he would reprise the role of Valjean at the Gielgud Theatre in a staged concert production of Les Misérables. Boe shared the role with John Owen-Jones and starred opposite Michael Ball (Inspector Javert); with whom he has performed on numerous occasions and Matt Lucas (Thénardier). The production opened on 10 August 2019, at the Gielgud Theatre and closed 2 December 2019.

Boe starred as the romantic lead Billy Bigelow in Rodgers and Hammerstein’s Carousel in a limited run at the English National Opera directed by Lonny Price, opposite vocalist Katherine Jenkins.

In January 2011, Alfred Boe performed for English National Opera in La Bohème and The Mikado. In March 2011, Boe performed three concerts in Idaho: two in Rexburg, and one in Sun Valley. In April, Boe appeared in The Great British Musical – The Famous and the Future at the Criterion Theatre and the St George’s Day celebration concert in Trafalgar Square. In May, Boe performed at the Classical BRIT Awards ceremony at the Royal Albert Hall, in the Isle of Man, and headlined the Hampton Court Palace Festival finale on 18 June 2011.

Boe appeared in the BBC Last Night of the Proms concert at the Caird Hall on 10 September 2011 and the Llanelli Choral Society’s Grand Performance Concert at Tabernacle Chapel, Llanelli on 24 September 2011. Boe commenced the ”Alfie Boe ’Bring Him Home’ UK Concert Tour” in Bristol on 6 December 2011, finishing in Gateshead Sage on 4 February 2012.

In October 2011, Boe announced that he would appear in the Lytham Proms Festival Weekend on 4 August 2012. The festival is hosted in the town of Lytham St Annes, close to his hometown of Fleetwood. The local newspaper Blackpool Gazette described his concert as a homecoming, using the title ’Bring HIM Home’.

On 6 May 2012, Boe performed at the Kauffman Center in Kansas City, Missouri. On 4 June 2012, Boe performed at the Diamond Jubilee Concert for the Diamond Jubilee of Elizabeth II. He sang ”’O sole mio” leading into Elvis Presley’s ”It’s Now or Never”. He also performed ”Somewhere” from West Side Story with American soprano Renee Fleming on the balcony of Buckingham Palace. He appeared on The One Show on 30 August 2012. On 2 October 2012, Boe embarked on a major U.S./Canada concert tour starting in Dallas, Texas and ending in Toronto on 29 October.

In December 2012, Boe was featured as a guest artist for the holiday concert series of the Mormon Tabernacle Choir, Orchestra at Temple Square and Bells on Temple Square. The concerts also featured legendary broadcaster Tom Brokaw, who narrated the story of Gail Halvorsen (who also made an appearance) and the candy bombers of the Second World War. Boe performed several Christmas favourites as well as ’Bring Him Home’. The live performances were recorded and released as Home for the Holidays feat. Alfie Boe.

Alfred Boe returned to the U.S. in late January 2013 for an eight-city tour, starting in Albany, New York 27 January and ending in Pittsburgh 9 February. In February 2013, Boe, colloquially known as the Lancashire Michael Bublé, was awarded two platinum albums by the BPI for Alfie (2011) and Bring Him Home (2010). Boe performed a three-week, 14-city tour, which started in Birmingham and ended in Belfast, Northern Ireland. On 15 April 2013, Boe was awarded a Fellowship of the Royal College of Music from his alma mater. On 26 May 2013, Boe sang ”Bring Him Home” at the U.S. National Memorial Day Concert on the West Lawn of the Capitol in Washington, D.C.

Boe performed at VE Day 70: A Party to Remember at Horse Guards Parade in London on 9 May 2015.

On 4 and 5 June 2015, Boe performed two concerts at Symphony Hall with the Phoenix Symphony, filling in for Colm Wilkinson, who was forced to drop out due to illness.

Alfred Boe appeared as music-hall singer Richard Chapman in an episode of Mr Selfridge. In 2016 and 2017, Boe and Michael Ball appeared in two ITV Specials, Ball & Boe: One Night Only and Ball & Boe Back Together. Boe replaced Aled Jones as presenter of Christmas Carols on ITV in December 2017. On 3 March, Boe performed in ’The End of the Show Show’ on Ant & Dec’s Saturday Night Takeaway alongside Michael Ball.

Alfred Boe met his wife Sarah while rehearsing La Bohème in San Francisco. They have two children, a daughter, Grace, and a son, Alfred Robert. He is a member of the Grand Order of Water Rats.

Boe was appointed Officer of the Order of the British Empire (OBE) in the 2019 Birthday Honours for services to music and charity.

On 24 August 2020, Boe announced that he and his wife Sarah had separated and that everything was ”very amicable”.