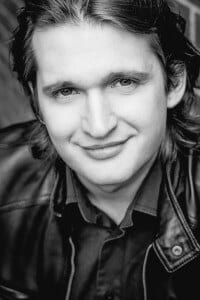 Tenor, Simon Petersson is an opera singer/musical artist and composer from Sweden.Simon has always loved being on stage and enjoys telling stories and expressing emotions with the human voice. His interest in opera and musicals began when he had the opportunity to perform in local musical productions in his hometown of Karlskrona, Sweden. When Simon turned nineteen, his interest in opera grew when he began listening to the great Swedish tenors, Jussi Björling and Nicolai Gedda. After one year of studying classical singing and opera in the north of Sweden at Härnösands Folk high school, Simon continued his studies at the opera school in Gothenburg.

Simon Petersson  earned his Bachelor’s Degree in Opera from the Accademy of Music and Drama at
Gothenburg University in Sweden. During his studies in the opera program he received training in singing, acting and music theory. Performance roles include Basilio from ”Figaro’s Marriage”, Bardolfo from ”Falstaff” parts of Don Ramiro in ”La Cenerentola” and the choir for ”The Rakes Progress.” During his final year of study, Simon was selected for his first professional experience when he got to play Basilio at Folkoperan an Opera House in Stockholm.

Upon graduation, Simon was hired by Svenska Teatern in Helsinki Finland for the musical ”Kristina from Duvemåla,” a Swedish musical by Benny Andersson, Björn Ulvaeus and Lars Rudolfsson. Simon played the part of the “navigate officer” and appeared in several small roles as a member of the cast ensemble. As a cover, Simon starred in thirteen performances as a lead in the part of ”Robert”. The musical ran for one and a half years and included 190 sold out performances.

Simon is also an aspiring composer and in 2014 finished his first large piece, “Havets Sånger” (Songs of the Sea) which includes ten songs.  The song cycle was performed in a collaborative exhibition with the American visual artist Lana Stephens.  The exhibition premiered at the Virginia Museum of Contemporary Art (MOCA) and ran for three months.

Simon is looking forward to attending the A.J. Fletcher Opera Institute and continuing his MM
studies to develop his skills in the field of opera where he will study with Dr. Marilyn Taylor.